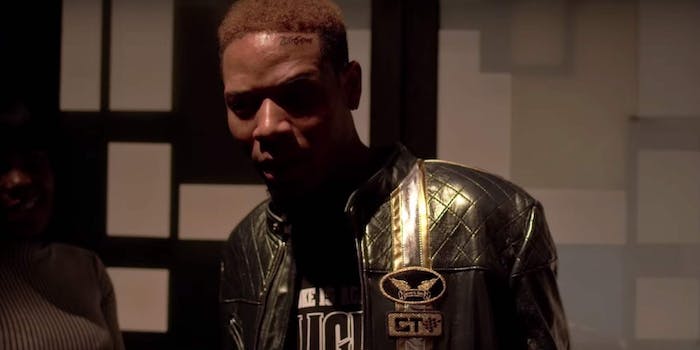 Is Fetty Wap destined to be another one-hit wonder?

Why you should be rooting for Fetty Wap, rap's incredible new songwriter.

The Weeknd, a Basquiat-haired Toronto singer signed by Drake, is blowing up the music charts with his debauched sex and drugs anthems. He’s become the first artist to hold the top three songs simultaneously on the Billboard R&B chart. He’s a headliner on summer festivals and projected as a long-term pop fixture. But there is an artist with more top-10 songs on that chart at this very moment, and they’re all wholesome love songs about cooking drugs and making money with his significant other.

You may have missed it, but Fetty Wap saw his singles, “Again,” “697,” “My Way,” and “Trap Queen,” all rise on the charts last week, also filling up the top 40 of the Hot 100 Chart (the one with Taylor Swift and the “Cheerleader”). This is an incredible feat for a rapper, especially in 2015, when rap and R&B scratch the pop charts fewer and further between. In fact Fetty is the first artist in history to have his first four singles all hit the top of the rap charts at the same time.

And in a marketing stroke of genius, every new music playlist on Spotify seems to come bundled with a Fetty feature. Even when the music isn’t, you know, new: “Again” was released as a follow-up single on Aug. 7 via Spotify—it hit YouTube in January. The”Appears On” section of his Spotify profile lists 27 guest appearances across the hip-hop landscape this year alone as a guest performer.

“Trap Queen,” the song that your uncle is discovering on Facebook this week and judging, was a slow burner. The now-platinum single was officially released in April 2014 but didn’t peak at No. 2 on the Billboard chart until May of this year. This allowed Fetty to continue recording new music without the distraction of instant fame and build somewhat organically. All while “Trap Queen” appeared to run its one-hit wonder course online.

A quick requiem for the song of the summer: There’s just no denying the cultural impact it made, from websites breaking their backs to try to define the nominal slang term for their readers, to the great argument made for it being the “greatest love song of our generation.”

Fortunately for Fetty and fans, his story won’t end there.

Just look at the Drake effect. In recent years, the Champagne Papi himself has hopped on remixes of songs as a way of positioning himself as a tastemaker, like with Migos and Makonnen. In Fetty Wap’s case, when Drake hopped on the “My Way” remix, it seemed less like a move intended as a big-name co-sign and more like one intended to placate the competition.

From “they should call me Jaaaaaames, ‘cause I’m going hard in this bitch” to the inept “gahdamn gahdamn” at the end, Drake sent over a trojan horse, one meant to both trash the song by association and also set himself up as the artist to “discover” Fetty Wap. Still, “My Way” became the seventh-most popular song in the country with the far superior–if still ham-handed–verse from Fetty’s homeboy Monty. Even as other Drake-assisted songs from Nicki Minaj, The Game, and Makonnen couldn’t crack the top-40.

The reason for Fetty’s success is not dissimilar from any other artist topping the charts–he straight up makes hits. As many percolating rap artists are incorporating more melodies in their flows elsewhere on the charts, Fetty stands above the rest. In addition to making a song about love whilst dealing crack cocaine universally relatable with lines like, “I just left the mall, I’m getting fly with my baby,” Fetty finds the perfect melody to get stuck inside ear canals. “Trap Queen” is a blaring expression of longtime love with a soaring hook and “My Way” is more repetitive and metronomic come-on. They both sound best when screamed at the club and surrounded by an inebriated makeshift choir.

Fetty Wap doesn’t have the most perfect singing voice, but much more importantly, he has a distinctive one. It is at the same time guttural and emotive—the frog in his throat is going through some things. There is something so pure about his singing voice, and it’s obvious when looking at his lyrics or interviews that there is also the same purity to Fetty as a man. He was born and raised in a rough area of Paterson, New Jersey, and he has talked about how his music and mindset have led him to avoid the pitfalls that are so pervasive in his neighborhood. His Instagram page, especially before he was posting photos on stage with Taylor Swift, is almost wholly dedicated to photos of his children.

Fetty has also brought his friends along for the ride. Montana Bucks has been featured on two of the four singles currently climbing the charts, and he, along with P-Dice, Khaos, and Fetty himself, make up the Remy Boyz 1738 group. The name comes from a particular type of Rémy Martin cognac, by the way. (Naming your crew after a brand of liquor is not uncommon for New Jersey rap.) This love of friends and family has made rooting for Fetty Wap infectious, even for people who aren’t necessarily riding for his music. Watch the video from his teary acceptance of a Music Choice Award–the first award he’s ever won–to see why anyone would want this kid to keep winning.

And continue to win, he has. Besides Fetty’s two biggest hits, he’s got more tentacles reaching to the top of the charts. “697” is yet another summation of everything that makes Fetty great: a certified banger with more game than any R&B ballad and a gorgeous hook, featuring his crew in the best light possible, all distilled into two minutes.

The other single is “Again,” currently the lowest song on the charts, but for my money is his best yet. The title refers to a past love, but the lyrics are all present tense. It flows over a plinko game of synthesizers and sounds like an ’80s Yaz song. It contains some of his most romantic lyrics: “I’m tryna finish this who I started with/I’m tryna spend it all who I got it with” and “I need you baby, I ain’t afraid to admit it.” It is his most polished pop song.

Fetty Wap was born with glaucoma, and when he was six months old, doctors had to take his left eye out. He got an implant and began wearing a prosthetic when he was 12 years old. A couple of years ago, he got tired of people looking at him funny, thinking he was cross-eyed. Fetty took out the prosthetic and has kept it 100 with his missing eye since. At the time, he had just started rapping–mostly just trying out flows over Chief Keef beats. Not long after though, Fetty recorded “Trap Queen” and started singing. He’s been mass-producing hits ever since, and he seems destined to get that No. 1 even if it’s with a song he hasn’t made yet.