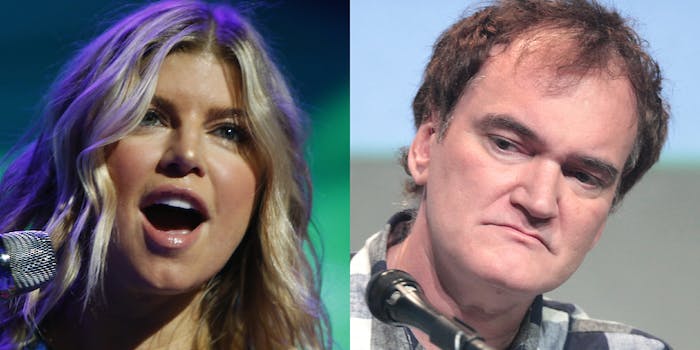 Back in 2006, the singer said Tarantino got a little too into his zombie role.

After Uma Thurman spoke about the dangerous stunt Quentin Tarantino made her do on the set of Kill Bill, and the “sadistic flourishes” he added, like choking and spitting on her himself, behind-the-scenes footage from 2007’s Planet Terror shines more light on the director’s questionable on-set methods.

In the special featurette, Fergie, who plays Tammy in the Robert Rodriguez-directed Planet Terror (Tarantino directed the other feature, Death Proof) says that during a zombie chase scene, Tarantino, who played one of the zombies, actually bit her, and they had to re-do the scene several times because he got so into “being this creature.”

Rodriguez, in his special feature interview, tries to downplay it: “It wasn’t that bad. It wasn’t like a bite, she wasn’t bleeding or anything. Certainly, you felt some teeth on flesh. It happens, people get into the role.”

Fergie later shows the camera a bruise on her upper arm, and says that “by the end of this shoot, I will bite him back.” (You can watch the footage here.) In a 2007 interview, Fergie brings up the incident again: “My manager has it on his camera. I’m not going to sue him or anything, but I wanted documentation. It was crazy cool.” Tarantino is credited as “Rapist #1/Zombie Eating Road Kill” on Planet Terror‘s IMDb entry.

Speaking with Entertainment Tonight on Thursday, Fergie added some clarification to the decade-old interview: “We were just kind of having banter… We were having a little bit of fun. But make no mistake, I don’t want to take away from anyone’s story, and I stand with every victim and everyone’s story everywhere.”

Diane Kruger, whom Tarantino choked himself in Inglourious Basterds, defended him this week and said he treated her with “utter respect” on set. Tarantino said earlier this week that the car scene in Kill Bill, which resulted in a crash and caused permanent damage to Thurman’s knees and neck, was “the biggest regret of my life.”