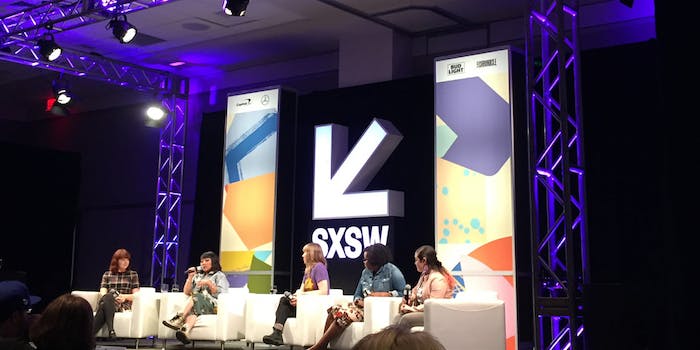 The women of Film Twitter are holding movies accountable

'You have to protect yourself as a woman in this space.'

In the last year, the film industry has seen a reckoning. Not the first or last, but it’s at least had to publicly try to change the conversation. The Me Too movement dovetailed with a flood of allegations against actors, directors, producers. Scandals at the Alamo Drafthouse and Cinefamily forced film fans to reconsider allegiances, and how many of their favorite cultural haunts are rife with entitlement and toxicity.

When it comes to representation in film criticism, however, there’s still a gap, as Jessica Chastain noted last year. Nicholson was joined by Alicia Malone of Fandango and FilmStruck, Jen Yamato of the Los Angeles Times, Jacqueline Coley of Rotten Tomatoes, and New York Times/The Lily critic Monica Castillo to discuss women in film criticism on Sunday. Specifically, how Twitter (and the microcosm of Film Twitter, a loose collective of critics and creators) has both amplified those voices and brought out the trolls.

As the conversation turned to male critics who’ve complained about having to write about “message” or “isms” in their reviews, Yamato surmised that white men have never really had to think about identity, but being a critic in an online space made her realize “that my opinion is just as valid as these older white men who have been in the game so long.”

“I cannot delete the fact that I’m a Black woman,” Coley added. “I can’t delete my blackness from it.” Coley also discussed Ava DuVernay’s A Wrinkle in Time, and how more people have asked her about that movie because it has a Black director. “We don’t give out Ava coupons,” she jested.

Castillo spoke about her experiences with trolling, citing how one male critic tried to check her knowledge on Suicide Squad after she criticized the depiction of the film’s Latino character; his followers came after her and briefly chased her off Twitter.

“You have to protect yourself as a woman in this space,” said Yamato. “Twitter amplifies great stuff and it amplifies scary stuff.”

This brought to mind Twitter’s recent women-friendly ad that aired during the Oscars, which glossed over the rampant harassment directed at women on the site and instead proposed empty slogans of empowerment and bravery. A critic being chased off Twitter for being a critic is just one pebble in the mountain of problems facing Twitter.

For all its toxic elements, Twitter can be a place for women to connect and find support, and not just with film: Last fall we saw the affirmation that happened around Me Too. Coley says she’s hopeful of what Me Too and Time’s Up can make happen, but wary of how Hollywood will handle it: “We have to cut away so many things that we don’t talk about.”

But there’s an upside, a more tangible shift that’s happening in film: Women’s voices are changing what kind of movies get made and what we want to see on-screen.