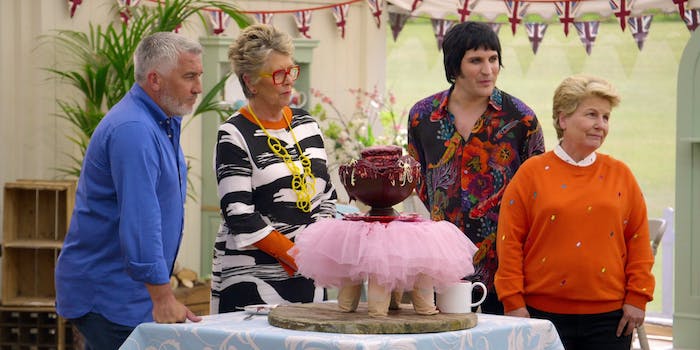 14 feel-good cooking shows to help you relax in quarantine

The shows that'll help you relax while sparking some inspiration.

The coronavirus has resulted in us staying indoors in quarantine for weeks at a time, giving many of us the time and opportunity to indulge in shows and movies that help us relax while others are taking to the kitchen. But whether you need some kitchen inspiration or want to live vicariously through those meals and bakes, these feel-good cooking shows offer the best of both worlds.

Whether they’re taking us on food-fueled tours around the world that we can’t indulge in ourselves, allowing us into their kitchens, or putting their skills to the test, there’s a calming feeling that comes with watching it unfold. The storytelling comes from the food and the people who make it; not everyone gets it right every time. The competition, if there is any, is lighthearted. And because there are often spin-offs, off-shoots, and similar shows, there is more than enough shows to start you down a rabbit hole.

It’s comfort food in its own way, but there’s a very good chance that it will make you want to make some comfort food of your own.

When it comes to feel-good cooking shows, it doesn’t get more quintessential than The Great British Baking Show. Every season, a group of amateur bakers puts their skills to the test as two famed bakers judge the competition with very little drama involved. While the original hosts and one of the judges are no longer with the series, it’s still incredibly soothing to watch. Netflix doesn’t have every single season that aired, but between the main series and The Beginnings (an earlier season grouped separately), Masterclass (judges Mary Berry and Paul Hollywood try their hands at baking challenges), and Holidays (a smaller, all-star group competes), the selection should hold you over for a while.

Nadiya Hussain won her season of The Great British Baking Show and our hearts with ease, and while she’s made several shows over in the U.K. (and was a judge on The Big Family Cooking Showdown), her latest series is the first to make the jump to Netflix. It’s a cooking show aiming to help families who struggle to find time to cook.

Jiro Dreams of Sushi director David Gelb devotes each episode to a different famous chef from around the world with an in-depth look at their lives in and out of the kitchen. While much of Chef’s Table is centered around chefs located outside of the U.S., a spin-off series focuses on French chefs.

No Reservations, which ran on the Travel Channel for nine seasons, is the second of three series from Anthony Bourdain where he explores the food and culture of a new city or country every episode. Hulu only has two seasons, but the small taste is enough to spark interest in his first series (A Cook’s Tour) and hold you over until CNN’s Parts Unknown arrives on HBO Max.

Based on her book of the same name, Samin Nosrat travels to Italy, Japan, Mexico, and Berkeley, California to take a more intimate look at the four elements she proposed were essential to cooking a successful meal.

Meme extraordinaire and all-around decent person Guy Fieri has hosted Diners, Drive-Ins and Dives since 2007, and it’s easy to see why the Food Network mainstay has had such staying power. It shows us the ins and outs of the eccentric and homey places hiding just under the radar. Through it all, Fieri is game to try just about anything—just as long as it doesn’t have eggs on it. And when we’re finally able to travel again, it’s a great starting point of restaurants to check out.

Jon Favreau—who wrote, directed, and starred in a film about a big-time chef who starts working on a food truck with his ex-wife and son—co-hosts with Roy Choi as they hang out with different chefs and celebrities. But above all else, the food remains the star. And while it’s not food-related, Disney Gallery: The Mandalorian further highlights Favreau’s hosting and moderation skills.

9) From the Test Kitchen

Bon Appétit’s Test Kitchen is wildly popular, but the chefs who made their cooking videos so addictive aren’t just on YouTube anymore. If you’ve run out of YouTube episodes to watch—and the Test Kitchen is still uploading new videos even though the cooks are staying at home—Amazon Prime has four series featuring the Test Kitchen crew.

Related: Cooking on High (one season), Bong Appetit (one season via Hulu)

This reality cooking competition series has plenty of pot-infused dishes to go around. But with a bigger emphasis on the food and not the weed, it introduces just what’s possible with these ingredients while sparking some truly inventive ideas.

As much as we strive to perfectly craft the dishes we see on TV or online, it rarely ever turns out that way. Nailed It! (and the many spin-offs it’s sparked) is a love letter to those who try. The dishes served by the contestants rarely ever look like they’re supposed to (and the taste is often questionable), but there’s never any malicious intent at their expense.

When something goes wrong in the kitchen on a Gordon Ramsay-show, it’s not uncommon to see him blowing up at everyone around him. So if that’s your main exposure to the chef, it’s a bit of a shock to see him in a much calmer element, whether it’s showing viewers how to make simple dishes at home or encouraging young chefs facing the pressure of a challenging dish that isn’t going quite right.

A chef is always learning, and that’s very much the case for chef David Chang. Each episode, he explores a particular concept or food and pushes past preconceived notions to discover more of what’s possible or what a particular dish might entail.

14) Julia and Jacques Cooking At Home

Related: (but only the Julia parts via Netflix)

Julia Child was involved in more than a dozen shows during her lifetime, but Amazon Prime has one of her final series, a cooking show with French chef Jacques Pepin that shows off a mix of American and French recipes.