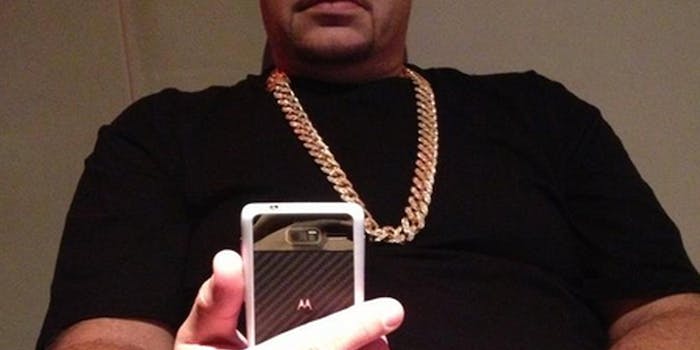 Fat Joe—photographer for the masses, appreciator of the asses.

But rather than snapping photos of sunsets and frilly foods, the New York-based rapper’s got his mind set on Instagramming “hoes”—whores, prostitutes, women who may or may not sell their bodies for money.

At least, that’s the conclusion we’ve come to after taking one whiff of the Big Pun apprentice’s hot new single “Instagram that Hoe,” a Rick Ross and Juicy J-tagged jam that boils with Memphis hip-hop heat.

Shouting “All my bad bitches report to Instagram right now,” Fat Joe declares war on Hipstamatic and other smartphone-friendly photo apps, suggesting that those who want to snap shots of scantily clad women, fully dressed women who may become scantily clad if you give them a few hundred dollars, and other associated ladies of the night can all take solace in Instagram, the massively popular app that was recently bought by Facebook.

Hoes, truth be told, aren’t the only objects of Fat Joe’s Instagramming affection. We’ve compiled a list of the other items that the author of “Lean Back” believes may go well with #nofilter.

Fat Joe, photographer for the masses, appreciator of the asses. Thank goodness we have Instagram to expound that knowledge to the masses.