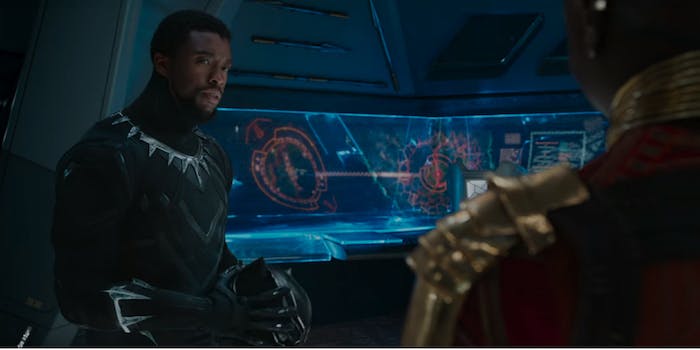 Many accounts are using graphic photos of domestic abuse survivors.

Black Panther opened this week to positive reviews and a $25.2 million debut night. But as has become routine on social media, with the premiere came fake posts meant to sow confusion.

One graphic photo has been circulated dozens of times, but as BuzzFeed News points out, the photo is actually from a January story about a Swedish teen who was attacked at a club after trying to get away from a man who groped her.

Many posts used photos of women who are domestic abuse survivors, with one account using a 2016 photo of a teen who was locked in her flat for four hours and beaten by her boyfriend. (The account has since gone private.)

A fake account for Paul Nehlen—the alleged racist and Republican congressional candidate running against Paul Ryan who has been banned from Twitter—used a still from a 2013 video about domestic violence. (The tweet has since been deleted.)

Another used a photo of ex-White House staff secretary Rob Porter‘s ex-wife Colbie Holderness, who alleged he abused her while they were married.

The Daily Show‘s Roy Wood Jr. tried to help with the debunk and even pitched a great new show idea. The photo of the bloody towel, which was featured in other tweets, is from 2009.

No stock photos formed against #BlackPanther shall prosper. ‘CSI: Black Twitter’ should be a show pic.twitter.com/J9KNFHw9tv

None of this should take away from the experience of seeing Black Panther, a truly important film. But Twitter needs to step up and suspend these kinds of accounts to stop facilitating the circulation of photos that use actual trauma and survivors of abuse to create dissonance and confusion.