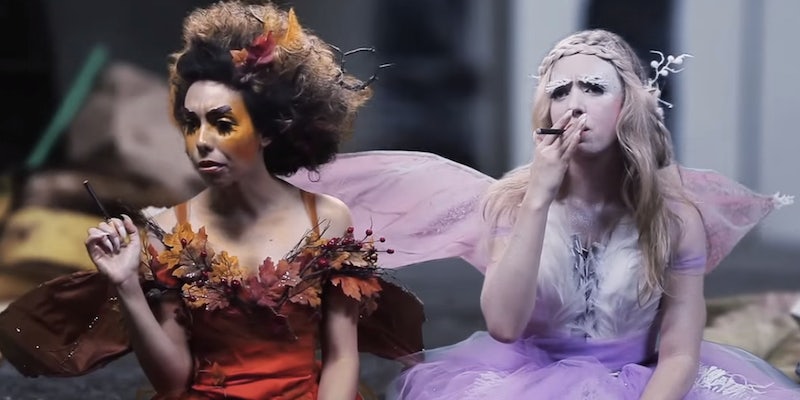 IFC’s new webseries proves even ‘Faeries’ get the blues

Faeries is full of feminist angst, with a magical twist.

The leading ladies on IFC Comedy Crib’s new webseries share all your feminist angst, with a magical twist.

The series Faeries debuted on Jan. 6, and the first episode smartly plays up the familiar frustrations of women navigating society’s expectations as they seek happiness. Or, in this case, the special blend of grumpiness and glee that makes faeries content.

Moth Catfrost (Kristen Acimovic) and Feathers Peppershimmer (Laura Grey) are endowed with magical powers and shimmery garments, but they’re cynical and savvy. In episode 1, “Baby Crazy,” they smoke e-cigarettes while deliberating the pros and cons of baby-stealing (something all faeries are expected to do) and bemoaning the limitations of age (“You know it gets way harder to steal a baby after you turn 35 million”). In a moment of true vulnerability, Feathers wonders, “Who’s going to hate me when I’m old?”

Series creators Acimovic and Grey, who will give their feminist sketch show a test run at the Upright Citizens Brigade Theatre in February, came up with their idea in casual conversation.

“We started talking about disgruntled city faeries one day over coffee, and “Faeries on a Smoke Break” became the thing we most wanted to make,” Acimovic told the Daily Dot. “We just weren’t sure we had the resources to do it.”

Enter UCB Digital and IFC. They loved Acimovic and Grey’s idea and made the city faeries a reality.

The visuals will appeal to anyone who loves fantasy, but beneath the shimmery surface, the series offers refreshing wit and depth. Both self-described “fantasy nerds,” Acimovic and Grey share a desire to approach familiar topics in a less predictable way.

“We’ve both made a lot of Web videos and seen a lot of Web videos… and we wanted to do something that was a bit of a departure from the norm… we liked the idea of doing something more magical and fantastical,” Acimovic said. “Overall, this series is a magical sublimation of our deepest female anxieties. These are magical creatures who are, like, SO OVER their magical lives. They’re worried and afraid and insecure just like everybody else.”

You can watch new episodes of Faeries every Tuesday on IFC Comedy Crib.