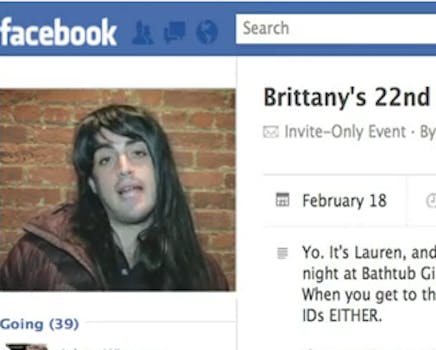 In case you needed a reason to be glad Facebook event invitations can’t talk, two comedians have presented the depressing alternative.

A two-minute clip envisions what those birthday invites from two awful people would sound like. The dramatic reads are performed by New York-based comedians Chris Distefano and Jared Freid. Since its posting Thursday, it’s racked up nearly 10,000 views but probably delivered far fewer laughs.

In the first portion, Distefano does a dramatic reading of “Johnny Blaze’s Blackout Friday” birthday party. The Blaze character is obviously a protein shake-drinking dudebro who promises that everyone will leave his party with “at least one genital wart.” He then calls you a pussy if you don’t show up. Blaze is probably still pissed over the ending of Entourage, so that’s why he’s acting out.

The second skit is an invite for “Brittany’s 22nd birthday party” at a speakeasy that serves “AMAZING” fries. Freid throws on a wig, does his best girl impression, and cringingly delivers the line “popping bottles on the reg … like we do.”

This skit is bit funnier than Blaze’s, but did the “Shit Girls Say” YouTube series set the precedent that guys have to channel their inner-females to mock women? Weird.

Watch the clip below and pray this series doesn’t become a book deal.