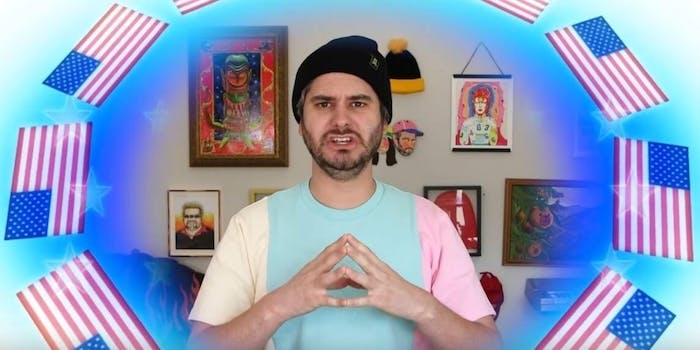 Klein used to be part of the Yang Gang.

YouTube star Ethan Klein originally endorsed Andrew Yang for president. But now that Yang has dropped out of the Democratic race to replace Donald Trump, Klein has moved on to his next favorite candidate: Bernie Sanders.

In a tweet posted Tuesday night, Klein—who has nearly 9 million YouTube subscribers spread across two channels and 2.3 million Twitter followers—wrote, “I am officially endorsing @BernieSanders for president with a $1,000 donation. Although take my endorsement with a grain of salt because my qualification is that I talk about poop on a podcast all day. That being said, I do support Bernie and wish him good luck.”

On Tuesday, Klein wrote the following for Yang: “Thank you @AndrewYang for transcending party lines and showing us the campaign of the future – Looking forward to what’s next for you.”

Klein wasn’t the only major YouTuber to endorse a Democratic nominee. Casey Neistat did as well, also giving his support to Yang. But now that Yang has walked away from the race, it will be interesting to see if Neistat—and other major YouTubers who have a propensity for politics—follows Klein and explains to their millions of fans who they’re now supporting and why.

Last month, podcaster Joe Rogan threw his support toward Sanders. Sanders then plugged Rogan’s endorsement, which set off a storm of controversy, as a number of women bashed Rogan for what they believe to be his sexism and for his conducting friendly interviews with far-right figures.

Klein also isn’t a stranger to controversy. He ripped K-pop and their fans recently, and blasted and body-shamed YouTuber Trisha Paytas for manipulating her Instagram photos and for transforming from what he characterized as “beauty queen to WWF wrestler in 2 seconds.”

And he’s apparently still wistful about Yang’s decision to leave the race, writing “MVP” on Twitter in response.