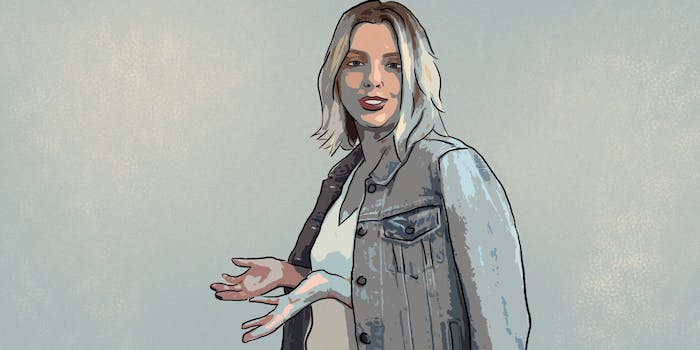 In the aftermath of the draining and inescapable presidential election, I’ve reverted to my YouTube security blankets. When everything feels chaotic—and even looking at a to-do list makes three gray hairs sprout out of my head—I turn to Estée Lalonde, a creator whose real talk never lets me down.

Lalonde sets herself apart from the traditional beauty vlogs in both her approach and content. (She’s an author, life coach, talented interior decorator, and proud dog mom.) Before I stumbled on Lalonde’s channel, I was hard pressed to relate to YouTube’s beauty community. I don’t wear much makeup—my style can be classified as “whimsical tomboy”—and the only hauls I voluntarily watch are book hauls. That’s how I party.

It wasn’t Lalonde’s tutorials that drew me to her channel, but her digital detox video. Ironically, it was her time away from the internet that glued me to my screen.

“As my interests evolve, so too does the content on my channel,” Lalonde told the Daily Dot via email. “Whether it’s talking about subjects that affect young women such as body confidence, periods, and virginity, or discussing the topic of health and fitness, during my YouTube career I’ve made a conscious effort to grow my channel as I mature and evolve.”

Lalonde first started making videos in 2011 after moving from Canada to London to live with her boyfriend, Aslan. Homesick for her family and friends, Lalonde became obsessed with beauty vloggers and decided to start a blog-turned-YouTube-channel of her own. Complemented by her warm and quirky personality, Lalonde’s tutorials began to stand out for their accessibility to even the most beginner of makeup enthusiasts. Over the last six years, she’s evolved her channel into a full beauty, fashion, makeup, and lifestyle brand with videos ranging from five-minute makeup tutorials to candid chats about quarter-life crises.

In 2015 InStyle named her the internet’s “best beauty reviewer,” and in 2016 Glamour praised her book, Bloom, and her personal style.

“The length of my career on YouTube is testimony to how much I adore what I do,” Lalonde explained. “I realize that I’m especially lucky to be able to spend my working week doing something that I love and that’s not something that I take for granted. However, six years is a long time to spend in any job, so for me it’s really important to make sure that my mind is constantly saturated with things that inspire and interest me.”

Her channel is full of talks about the importance of self care—especially, as she shares in her book Bloom, as it relates to her anxiety and depression. As she shared in her video with Arden Rose: “[With] unwinding, you have to take pleasure in the details.”

Despite her collaborations with top beauty and fashion lines, what I love most about Lalonde is her normalcy. Her obsession with pottery, planners, and Saturday morning walks with her pup Reggie and boyfriend Aslan. Her tattoo of a badass woman, and her constant drive for self-improvement. She’s someone I both deeply admire and want to befriend.

“As cliché as it sounds, there’s something about entering a new year that makes me feel excited for change,” Lalonde said. “In the coming year, I want to make sure that I continue talking about issues that really matter. I’m lucky to be able to speak to an audience who feel more like a group of friends than my viewers, so I’m hoping to cover more subjects that might resonate with the people who watch my videos in the hope that we can all help each other out.”

Lalonde reminds me it’s not about living the perfect life, but living a full and honest one. And that is exactly the message the internet needs.