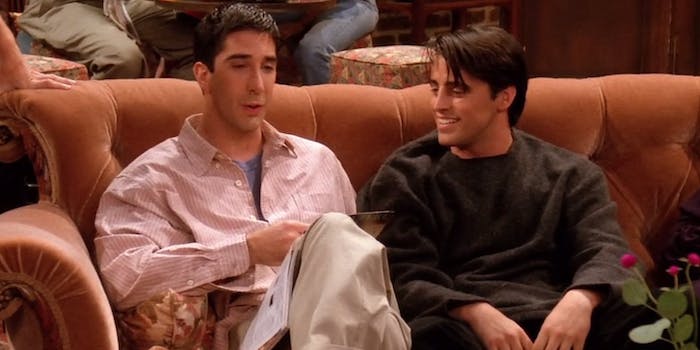 TV theme songs get a twisted remix from this YouTube musician

Buried on YouTube, there’s a veritable treasure trove of 68 videos that effectively rewrite TV history. Each video delivers a classic TV theme, rewritten with a more oblique take on the stories (e.g., an alcoholic Bart Simpson and How I Met Your Mother meeting a violent end). It’s the work of musician Erik Helwig, whose labor of love was creating new songs for TV shows—including some he’s never even seen before—and tweaking our collective nostalgia at the same time.

His take on Friends is a perfect example: Eschewing the hand claps and upbeat pop chorus, Helwig’s version hinges more on laid-back keyboards and lyrics like “I’ve got friends and you’ve got friends; let’s put our friends together.” With a chorus that names the cast one by one, it’s odd for sure, but it’s still insanely catchy.

The videos all begin with the iconic HBO logo, a hallmark of unmissable late-night viewing. Erik explained: “It seemed like a funny/stupid consistency thing. Also, it would be a sign to anyone looking for the real theme that something might be wrong.”

This isn’t Helwig’s first taste of viral fame. In the early days of YouTube, his band Lemon Test made a video called “Alex’s Drum Time,” which was a fake instructional drum video that trolled people with its unreliable advice.

It was his latest project, though, that caught the attention of Reddit and Gawker, where it was described as “smart, and genuinely funny, and probably too weird to go viral, anyway.” It’s rare that such an interesting idea could stay hidden on the Internet for so long; finally, someone was allowed to create and develop their ideas in peace. Helwig explains that the themes themselves were honed in isolation: “I just kept doing it no matter what. It was basically a theme per day for all that time.”

It all started in March of last year when Helwig and his girlfriend were watching HBO’s Girls, and he came up with his version of the intro off the top of his head. Though the inspiration came from altogether different place—Adult Swim’s animated talk show Space Ghost Coast to Coast—Helwig said the ultimate goal was “to create parodies that make it clear you’ve never actually watched/experienced the show, where it sounds like you’re being a snarky prick but you’re messing up all the details so clearly something is amiss.”

Before creating his own world in warped TV land, Helwig was writing romance ebooks to survive. Instead of living his life in others’ romantic fantasies, however, he decided to pursue his own true passion: music. He’s been working at a music career for 10 years now, and the TV themes became a welcome distraction when his forthcoming album was getting mixed.

But what started out as a joke songs soon became music in their own right. After doing a song every day, everything had become a blur until his girlfriend heard his latest song—the theme for Are You Afraid of the Dark?. “She told me that I could use it as a real song. I said I could change the lyrics and stuff, but she said I didn’t need to change a thing. I … realized I’d crossed a boundary into more legit territory. I couldn’t figure out whether it was a joke anymore? Or was it a real thing? I’d got lost in my own project, which was a neat feeling.”

Letting the outside world in hasn’t been all positive though, with some commenters not getting the joke and at least one disputing his skewed view on The Simpsons, a world in which Bart and Marge are married and Bart is an alcoholic. “One guy was legit mad and figured that I just messed up the details that far. Which is pretty absurd in itself that someone could spend hours making something like that and then just completely ruin everything by mistake!”

Even though some comments may not be the most positive, Helwig takes them all in. Some even put in requests or suggestions for new tracks, “and I don’t think they actually think I’m going to do it … and then BAM, it’s up there kind of like a personalized little weird gift.”

For the man who’s spent a year in TV isolation, it’s good to see he’s embraced the best lessons the very sitcoms he parodies have to offer.