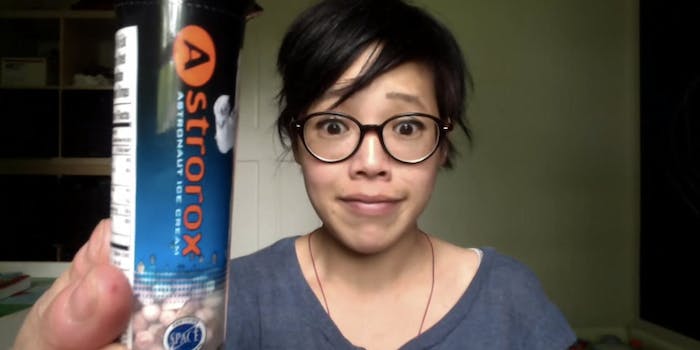 Everything Emmy consumes is sent to her in hand-curated boxes by fans.

Long before BuzzFeed and Cut Video began even contemplating the idea of a food series—“American Kids Try Breakfasts From Around the World” and “Mexican People Try Taco Bell for the First Time,” to name a few—EmmyMade in Japan had already begun making a name for herself as the foodie of YouTube, sampling her way through snacks, drinks, and treats from all around the world.

Emmy originally started her channel with the dual intention of combating the loneliness of moving away from home and documenting her adventures as a foreigner living in Japan. She began filming herself thoughts about Japanese snacks, and over time, she has built her channel into an empire of taste-testing and international recipes. Her videos are not “food challenges,” but rather a detailed account of the taste, packaging, and history of a country’s cuisine. Everything Emmy consumes is sent to her in hand-curated boxes by fans, but having tallied 73 million views and counting, despite Emmy making three videos a week, there is still a five-month waiting period between her receiving a fan’s hand curated goody box and being able to film a video about it.

Over the past five years, Emmy has taken her fans on a food adventure from the sweets of Slovakia to Germany, from the butt pudding of Japan to Russia, Canada, Estonia, and Arizona. She’s even expanded into military rations and space food. While her channel is best known as a  taste-testing emporium, it’s grown over the years to include international recipes and food tutorials such as “How to Make Cake Filled Origami” and how to eat the Filipino snack balut (a duck embryo). Emmy even began keeping a food diary after receiving so many comments asking how, despite her work on YouTube, she hasn’t expanded to the size of a linebacker. The key? Lots of greens, avocados, and reasonable portions.

As millions of us would agree, Emmy has the dream job. Trying snacks, desserts, and drinks from around the world? Yes, please! It sounds like a simple idea, but really, the crux of her success lies beyond the food and in the cultural education each video is providing viewers. Throughout her series, Emmy has shown how one country’s cuisine influences another, and by using the packages curated by viewers, Emmy is providing an actual representation of what the food culture is like in countries around the world. The more viewers who are exposed to these foods—and, through Emmy’s meticulous descriptions, to the tastes of these foods—the more accepting and adventurous they’ll be in their travels and in their relationships with people around the world.

Thank you, Emmy, for opening up our eyes and taste buds for over five years. My family has a lot of origami cake coming their way this holiday season, and they definitely have you to thank.