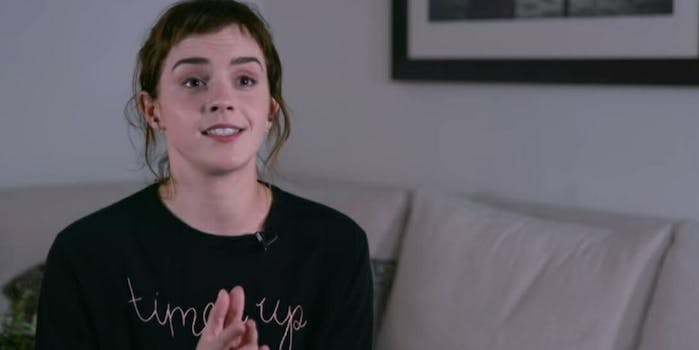 Emma Watson showed her solidarity with the Time’s Up movement by sporting a temporary tattoo to Vanity Fair’s Oscars after-party Sunday evening. Unfortunately, a grammatical error stole the attention from the message she was trying to communicate.

As photos surfaced of the actress’ body art, critics quickly pointed out that her tattoo read “Times Up” and was missing an apostrophe. Some said it was odd that a graduate from Brown University would make such a basic grammatical error.

Emma Watson seems to be missing an apostrophe on her Time's Up tattoo pic.twitter.com/aHtBng9Lhh

Emma Watson got a “Time’s Up” tattoo but it’s missing the apostrophe. I sooooo thought she was better than that. #oscars

Well however bad your day’s been.. you could always be Emma Watson(’)s tattoo artist!

Regardless of the typo, Watson got her point across loud and clear—Watson, at least, got more people talking about the movement.

Watson has been leading the Time’s Up movement efforts in the U.K., where she launched the U.K. arm of the movement’s Equality and Justice fund created to fight the anti-discrimination battle in Britain. Watson donated $1 million to the fund, as well.