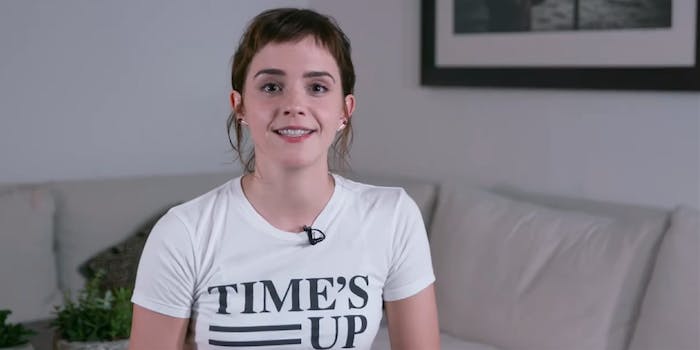 Emma Watson pens tribute to Savita Halappanavar, who died after being denied an abortion

Watson writes: 'In your memory, and towards our liberation, we continue the fight for reproductive justice.'

Emma Watson wrote an open letter to Dr. Savita Halappanavar, the Indian-born dentist who died in Galway, Ireland, in October 2012 after being denied an abortion.

Watson wrote the letter for Porter magazine, and it opens: “You didn’t want to become the face of a movement; you wanted a procedure that would have saved your life.”

It was a great honour to be asked by @PORTERmagazine to pay the deepest respect to the legacy of Dr Savita Halappanavar, whose death powered the determination of activists to change Irish abortion laws & fight for reproductive justice all over the world. https://t.co/KZWRpp7btO pic.twitter.com/yLDXgcHKyh

Halappanavar’s 2012 death—the result of being denied an abortion during a septic miscarriage—affected an entire generation of women who grew up under the Eighth Amendment, which banned abortions in Ireland. In May, Ireland voted to legalize abortion, and Halappanavar was held up as a prime example of why abortion should be legal, and how it can save lives.

New legislation, which has been dubbed Savita’s law, is set to be implemented this year, and would allow abortion by request up to 12 weeks, and in special circumstances up to 24 weeks.

You didn’t want to become the face of a movement; you wanted a procedure that would have saved your life. When news of your death broke in 2012, the urgent call to action from Irish activists reverberated around the world – repeal the Eighth Amendment of the Irish Constitution. Time and again, when our local and global communities collectively mourn a tragic death due to social injustice, we pay tribute, mobilize and proclaim: rest in power. A promise to the departed and a rallying call to society, we chant: never again. But it is rare that justice truly prevails for those whose deaths come to symbolize structural inequality. Rarer still is a historic feminist victory that emboldens the fight for reproductive justice everywhere.

Your family and friends were gracious and galvanizing in their sharing of your memory. They told us you were passionate and vivacious, a natural-born leader. I heard that at Diwali in 2010 you won dancer of the night, going on to choreograph routines with children in your community. I watch the video of you dancing in Galway’s 2011 St Patrick’s Day parade and am moved to tears by your thousand-watt smile and palpable enthusiasm. Sharing their mourning and hope with the world, your family publicly supported the Together for Yes campaign. Celebrating repeal, your father expressed his “gratitude to the people of Ireland”. In reciprocity, I heard Ireland’s ‘repealers’ say that they owe your family a great debt.

A note on your memorial in Dublin read, “Because you slept, many of us woke.” That the eighth amendment enabled valuing the life of an unborn fetus over a living woman was a wake-up call to a nation. For you, and those forced to travel to the UK to access safe, legal abortion, justice was hard-won. From Argentina to Poland, restrictive abortion laws punish and endanger girls, women and pregnant people. Still, Northern Ireland’s abortion law predates the lightbulb. In your memory, and towards our liberation, we continue the fight for reproductive justice.