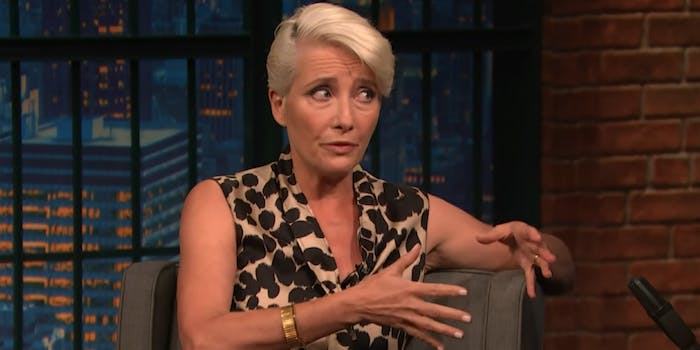 She wrote a powerful letter questioning why abusers get to keep working.

Emma Thompson wrote a powerful letter to Skydance Animation regarding why she pulled out of upcoming film Luck.

In a letter to management, Thompson questioned why Skydance recently hired John Lasseter, the former Pixar head who was accused by multiple women of sexual misconduct in 2017. “It feels very odd to me that you and your company would consider hiring someone with Mr. Lasseter’s pattern of misconduct given the present climate in which people with the kind of power that you have can reasonably be expected to step up to the plate,” she wrote.

Lasseter left Pixar in 2018, but was quickly hired by Skydance in January, a move that frustrated employees and organizations like Time’s Up, which said in a statement: “Skydance Media’s decision to hire John Lasseter as head of animation endorses and perpetuates a broken system that allows powerful men to act without consequence.”

Thompson echoed that sentiment but zoomed out even more, calling out the power structures that allow abusive men to continue working or making a comeback without actually addressing their issues, and how that affects people who have to work with them. She asks: “If a man has made women at his companies feel undervalued and disrespected for decades, why should the women at his new company think that any respect he shows them is anything other than an act that he’s required to perform by his coach, his therapist, and his employment agreement? The message seems to be, ‘I am learning to feel respect for women so please be patient while I work on it. It’s not easy.’”

Emma Thompson writes to the producers of "Luck" re their hiring of John Lasseter, who recently left Disney/Pixar following multiple allegations of sexual misconduct. https://t.co/Bfxcn2bgNB pic.twitter.com/6ouWBkClpv

Thompson reportedly pulled out of the voice cast for animated film Luck last week. She ends the letter by saying she’s “well aware that centuries of entitlement to women’s bodies whether they like it or not is not going to change overnight. Or in a year. But I am also aware that if people who have spoken out—like me—do not take this sort of a stand then things are very unlikely to change at anything like the pace required to protect my daughter’s generation.”