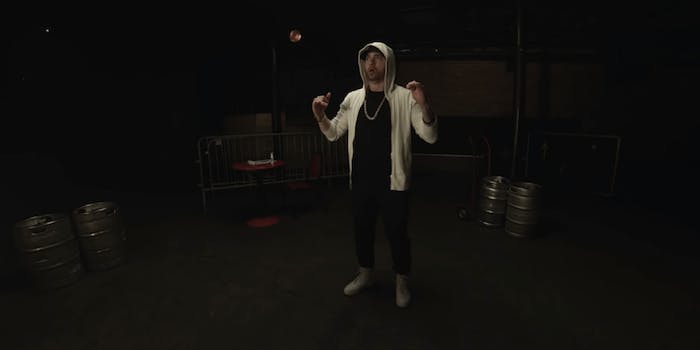 He raps at length about the 2017 bombing at an Ariana Grande concert.

On Friday night, Eminem was apparently feeling “nostalgic about battle rap,” which lead to the release of “Kick Off,” an 11-minute freestyle that checks Ariana Grande, Justin Bieber, and Reese Witherspoon.

The release of BODIED has me feeling nostalgic about battle rap so I headed down to my old stomping grounds, Hit the link for 10+ minutes of it 🔊 “Kick Off" (Freestyle) – https://t.co/gR49ti7sVI pic.twitter.com/GzSmYlmaaW

Filmed at his “old stomping grounds”—St. Andrew’s Hall in Detroit—Eminem starts off rapping about suicide bombers and references Grande’s 2017 Manchester concert where a bombing killed 22 people. (Eminem helped raise money for the families.)

He goes on to mention Bieber, Witherspoon, Dr. Dre, Jada Pinkett, and Laci Peterson. He also freestyles about his balls, and choking women.

This has been an exhaustive year of Em beefs: In August he released Kamikaze, which name-dropped Tyler the Creator, Lil Pump, and President Donald Trump (again). Around the same time, he engaged in a freestyle beef with Machine Gun Kelly, which might have just been some well-crafted PR. Bhad Bhabie’s fans also came for him, after some accused Eminem of lifting beats for Kamikaze from the 15-year-old rapper’s song “Hi Bich.”