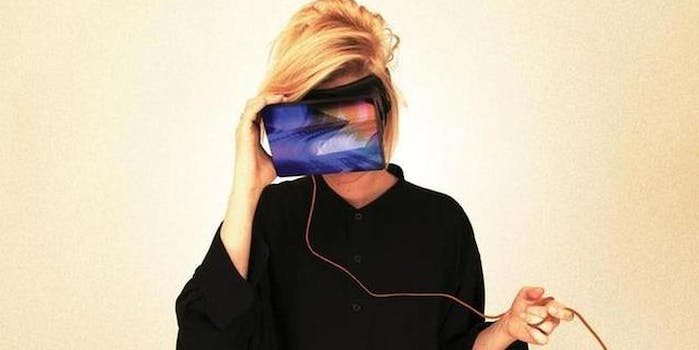 EMA stares into the Internet void

Erika M. Anderson discusses her new album and the space between Second Life and IRL.

EMA’s latest album, The Future’s Void, opens with a quick wash of noise. It’s unsettling, harsh—and “Satellites,” a song about surveillance, is our entrance into the void.

The Future’s Void is singer and guitarist Erika M. Anderson’s meditation on virality, dissociation, and identity. On the album’s cover, she wears an Oculus Rift headset, the cord disappearing out of frame, plugged into everything and nothing at once. On “3Jane,” the album’s linchpin, Anderson sings: “Feel like I blew my soul out / Across the interwebs and streams / It was a million pieces / Of silver and I watched them gleam.”

The conflicted self is a theme on The Future’s Void, the followup to her 2011 critically acclaimed debut, Past Life Martyred Saints, and it takes a couple listens to sink in. But it’s not all dystopian visions; there’s an emotional core, one of self-exploration. Anderson wrote about “3Jane” on her website, after Facebook announced it’d bought Oculus Rift, and touched on the digital divide:

“No one was really ever that mean to me on the internet. I never had that ‘thing’ that happens when you wake up one morning and somehow your life is ruined because a mortifying picture goes viral or a ‘funny’ tweet becomes horribly misread. Sure, there were bitchy things in the comments of videos, but organized trolls never unleashed a wave of death threats on me, and only a few people suggested that I kill myself.

“So the internet never actually did that to me. But it did that to somebody. And now we all have this stupid crippling fear that someday it will happen to us. And the likelihood increases as you move from relative obscurity to becoming more broadly visible on the internet. There are more cameras on you, more chances to be quoted saying something stupid, and more people out there who relish seeing successful people disgraced and dethroned.”

Anderson spoke to the Daily Dot about the Internet, Second Life, and controlling her online image.

I read your blog about Facebook’s purchase of Oculus Rift. Is that something that interests you? Do you feel like it’s a progressive movement, or is it unsettling?

I feel like Facebook buying Oculus really completed the meaning of the cover and actually tied it in in a way that was not even possible for me to do. And yes, it sounds horrifying if you read [Zuckerberg’s] statement. He’s like, “We can’t wait until billions of people are on this.” With the record, I think people read the lyrics as sort of this didactic, lecturing, anti-Internet record, which to me, it’s not. There are certain parts that talk about my personal feelings, but one thing I’m realizing is, with a song like “Neuromancer,” I think that’s actually getting interpreted wrong. When I’m saying, “Making a living off taking selfies, such a narcissistic baby, such a new millennial baby,” I’m actually talking about things that have been said to me. Is it true? Do you believe what they say about you? Or us? … I think it’s a bit more complex than people are actually reading it as.

It’s difficult, because people kind of listen to whole records now, but most people are going to get some idea of who I am by scanning the headline next to a picture of me, and they’ll be like, “Oh, someone told me this album sounds like this, and it’s about the Internet.” But yeah, that aggregate of photos and words: The photos are usually not taken by you, the words are not written by you, but that starts to be your weird avatar, and people think they know you or have an understanding of your work. And if that thing becomes sort of like you but starts to veer at some point, you get a sense of vertigo, of dissociation. … In the future, I don’t even know if there will be a relevant distinction between someone’s online persona and in-real-life persona. They might not have this vertigo.

It will be more seamless.

Yeah, hopefully. Who knows? So, one of the reasons I took those sad Second Life photos, as I’m calling it, is because I realized if I’m complaining about the way I’m represented, or I feel weird about it, the only thing I can do in a constructive way is to try to generate my own images. 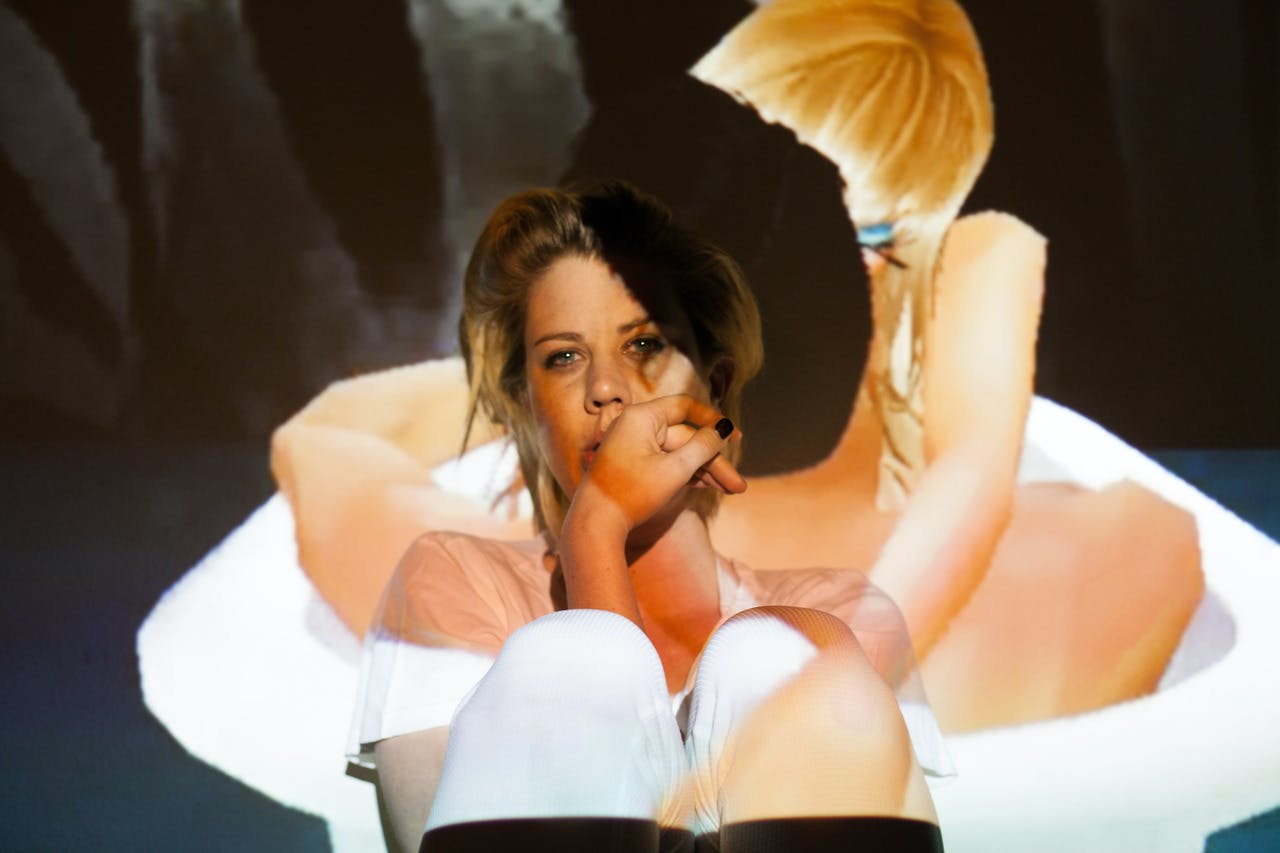 Do you participate in Second Life?

We played around with it, because we discovered this YouTube series called Soda Gnome, and so we got kind of obsessed. So it was like, let’s put me in some funny ones—let’s put me in a virtual realm. And we just kept seeing all these virtual lap dances, and this sort of sad, dystopian R&B song, like a Weeknd song. So it wasn’t like I set out to pose really sad in front of, you know, weird porn. It just sort of happened as we were browsing through things. … I don’t have any real didactic worldview on whether online interaction is bad or good. I’m just watching it go through growing pains, watching with awe. It’s like looking out at the galaxy, you know? Humans are crazy.

Sort of related to the issue of image: Do you read comments on social media?

I’ve been reading my reviews for this record, and a lot of them are good, and some are bad. I knew this record would be more polarizing than the last. The subject matter and words would be more polarizing, and some people would hate it. But what can you do? It’s cool as an artist to make something that’s debated a bit. The one thing you don’t want is for someone to look at your picture, and look at the number next to it, and keep clicking.

I wanted to ask about “Dead Celebrity,” because social media has turned into this new mourning ground for people we didn’t even know. Do you see a difference in the way women are treated, as opposed to men?

I know there’s this whole idea that fame can be destructive. It’s an old story. But there seems to be this super strain that’s affecting you women pushed into the spotlight. The Britney insanity, the Amanda Bynes breakdown, Amy Winehouse. I remember reading later—I think I’d already written “Dead Celebrity”—that the night she died, she’d been watching YouTube videos of herself, which was the saddest thing to me. Because you know the comments are going to be awful, ripping her apart. I do have a certain real sadness for these young women in the spotlight. It just seems to affect them disproportionately.

I was reading an article recently about online harassment, which asserted that the women who might be most capable of enduring it are the ones who can shut down a part of themselves to deal with it. And that sort of blew my mind.

Gender on the Internet is so interesting, because, on one hand there’s this frustration and hate. But, in the beginning, some of the first people to make money on the Internet were webcam girls. Those words are always there, those slurs, those threats of violence, but there are a lot of women in power on the Internet; they have a perceived sense of popularity, and they take beautiful pictures of themselves all day, and people become fascinated. And there are those who wish they had that power. There’s this power dynamic. It’s complex. But like I said, there’s that super strain.

On Twitter, you mentioned that you were angry when you wrote this album. Have you been able to pinpoint why?

I’ve thought, “Why didn’t I just make something that wasn’t as mad?” But, fuck it. If I was mad, there was a real reason why I was. That feeling that you keep needing to feed the beast; you keep needing to put up more photos and more things. And I can’t tell if that’s the Internet, or if that was the same in the ‘80s, when you needed more and more pictures. But I’m trying to be very even-handed with things. It’s the Midwesterner in me. I think it’s empathy. I don’t really want to judge people; I want to understand them.

I’m a person who was terrified of the Internet, who’s just now getting back on the Internet, but I have this hope that we’re about to turn a corner on things. I think we’re going through some growing pains right now, but I have a hope certain things will settle. The thing I fear more than [trolls] is that we’re about to get into a super-capitalist advertising takeover, even though we’re kind of already there.