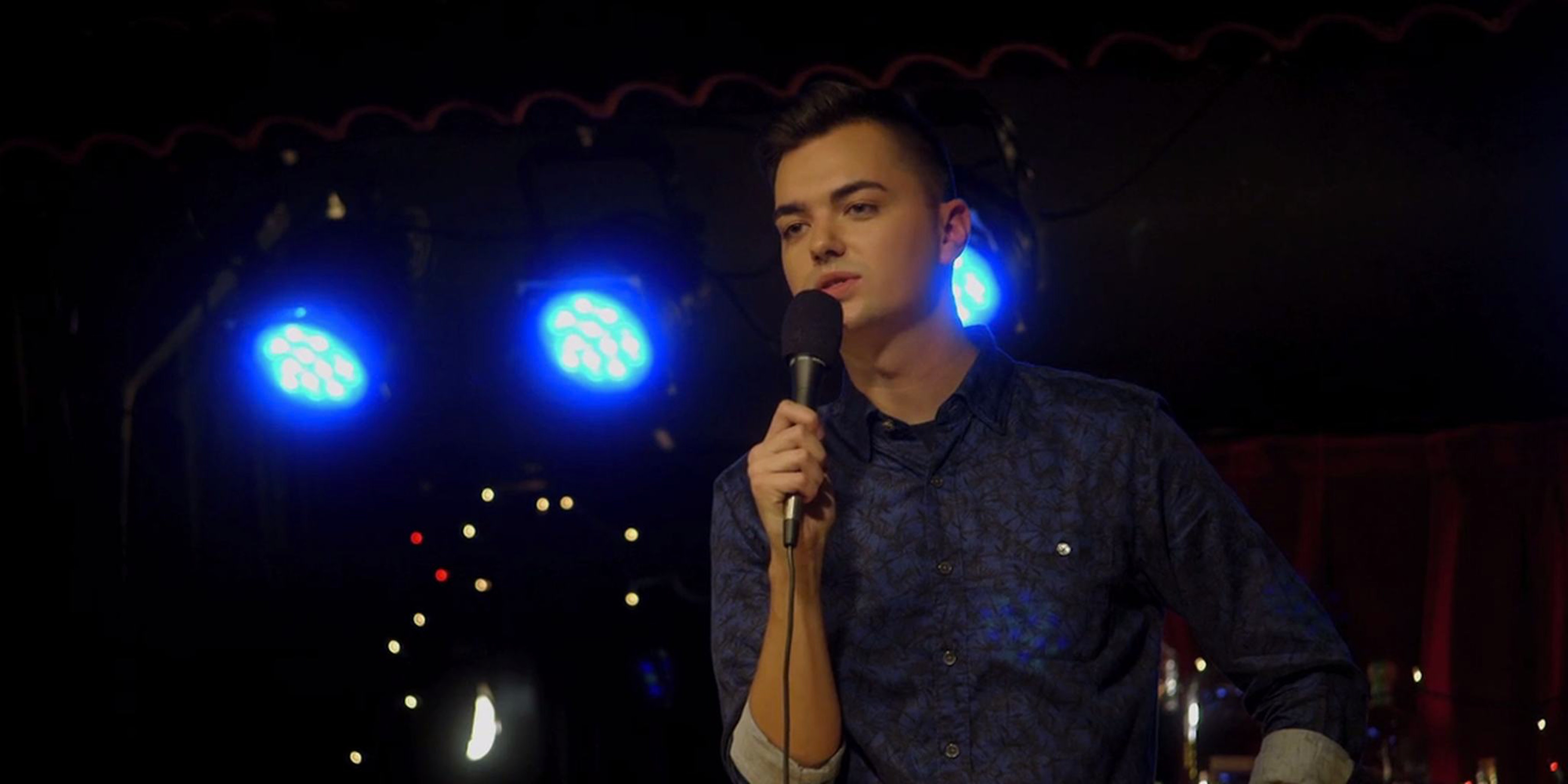 'I try to present a persona on stage that’s a little bit peaceful.'

But there is something different about Morgan’s style, and he borrows a description from a recent podcast with comedian and writer Mia Pinchoff.

“I try to present a persona on stage that’s a little bit peaceful,” he said over short rib sliders in West Hollywood a few days before the special’s premiere. “I’m not trying to be crazy and loud. There’s sort of a peaceful, confident vibe. Confidence is maybe the wrong word, but an assuredness to the jokes that people haven’t really seen in my YouTube stuff.”

That’s another difference. Although he might be relatively new on the standup scene, he’s been simultaneously honing his craft as an “influencer” in the YouTube world, most famously as part of SourceFed. However, he didn’t grow up with dreams of digital fame, instead starting his career doing theater in Florida at age 8 and attending a performing arts high school before switching gears in college and majoring in zoology. Television and Hollywood were always on his mind.

“I remember I asked my mom one day how movies worked,” Morgan recalled. “I really wanted to be Jim Carrey. I thought that the way it worked was the movie studios knocked on doors and said, ‘You’re going to be in this movie!’ I thought they knocked on Jim Carrey’s door all the time. My idea as a child was if I moved into the neighborhood where Jim Carrey lived, they’d come by. Which is probably somewhat accurate, because Jim Carrey’s neighborhood probably has a lot of famous actors in it.”

When Morgan did eventually move to Los Angeles, he began auditioning and eventually one of those outings led him to a role on SourceFed, a news and pop culture channel created by Phil DeFranco in 2012 as part of YouTube’s initial $100 million original channel program.

Morgan calls his early days on YouTube “very green,” and recalls the show’s fans not liking him.

“When it first started I was trying too hard,” he said. “The audience was like, ‘Kill him.’ I remember one comment was, ‘I’m going to hit you so hard your head falls off.’”

For Morgan, transitioning to standup comedy was a reaction to being on YouTube.

“It was weird because at SourceFed, I could say anything and people thought it was funny, but I wasn’t getting better at anything,” Morgan explained. “There was no honing or sharpening. How I was there was how I was going to be if I stayed there.”

In 2014, he officially left the program, although he did recently do a series called The Study. In the world of YouTube, where people often find a lane and stick to it, earning them consistent views and traffic, Morgan hasn’t been afraid to shake things up and stop projects just to start new ones.

“I’d have to probably ask my therapist why I have a desire to consistently left turn,” Morgan laughed. “I think it boils down to a desire for my product to be the most accurate representation of me. I don’t think I’ve got there yet. If whatever I’m doing isn’t the best representation of what I have to offer, I tend to deviate.”

For example, Morgan’s long-running series Happy Hour was an attempt to deviate from the jump-cut-heavy world of YouTube vlogging. Instead, he developed and delivered a monologue three times a week, using his performance to circumvent the jump-cut style. But even that wore thin, and Morgan stopped when he hit a point where he’d everything he could with the concept.Standup is another kind of left turn, and after honing his skills at clubs and live performances, Morgan turned to Vimeo to help him release the Supergravity Pictures-produced special, Premature, which fans can stream for $5.99.

“I was really impressed with how [Vimeo] did Oscar’s Hotel,” said Morgan, referencing the series from fellow YouTuber PJ Liguori that set a sales record for Vimeo earlier this fall. “The way that they supported PJ and the way they made his vision come to life. I thought that was so cool, and such a high-quality product and so creatively different. I think they established themselves as the HBO for digital content, where it’s premium and it’s different and they give the creator free reign.”Morgan doesn’t pull any punches on his special, discussing The Bible, feminism, and gender identity, among other controversial topics. They’re jokes he calls “semi-offensive,” but not overtly mean. His desire to play along boundaries came from existing on the YouTube and digital medium, where political correctness rules.

“I think that kind of thing gave me a sixth sense for political correctness that I can play with, especially in the standup world,” he said. “With standup, if you get offended at it, that’s really silly. You’re entering this medium that’s known for being offensive, and I’m certainly not doing anything to push envelopes, but that’s one of the things that drew me to it.”

With the release of Premature, Morgan has plans for a tour, and will also be auditioning for television roles while finishing drafts for a new webseries with his former SourceFed co-workers Joe Bereta and Lee Newton. For now, though, he’s getting used to letting his creation out into the world.

“It’s my baby,” he said. “It’s kind of like the thing I care most about that I’ve ever done. So it’s terrifying. And I know that it’s not perfect yet, but that’s OK too.”