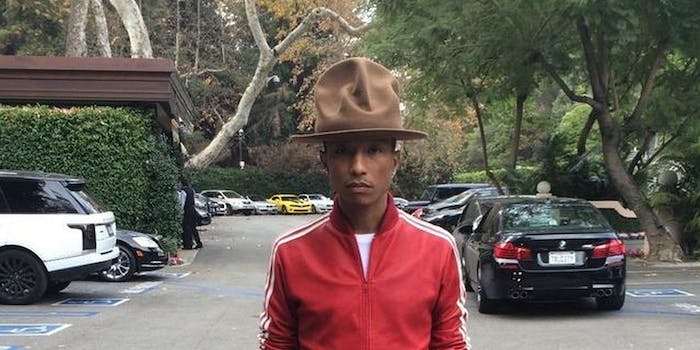 The beef has come to an end.

The epic Twitter love story between Pharrell Williams’s hat and Arby’s has come to an end. Last night, before the Oscars began, the restaurant chain bought the instantly meme-able brown hat Williams wore to the Grammys. The restaurant chain’s winning bid on eBay: $44,100.

.@Pharrell You’re welcome. We’re HAPPY to support a great cause & get our hat back. Good luck at the #Oscars tonight! pic.twitter.com/2oA7qDPX9z

Williams’s brown Vivienne Westwood hat became a meme during the Grammys with its own Twitter account, and was photoshopped into Internet infamy. Because Arby’s is an edgy, provocative brand, it tweeted at the singer.

Hey @Pharrell, can we have our hat back? #GRAMMYs

Late last month, Williams decided to use his hat’s fame for good and put it up for auction to benefit his charity for at-risk youth, One Hand to Another. The hat racked up 131 bids, but Arby’s ultimately won out. Williams let his fans know all is well between him and Arby’s, complete with an emoticon.

What a pleasant surprise. Thank you @Arbys, our roast beef is now officially well done. 😝

Hopefully the hat sold on eBay was legit. It was apparently spotted at the Oscars last night. Thankfully, Arby’s kept up the topical tweets during the awards.