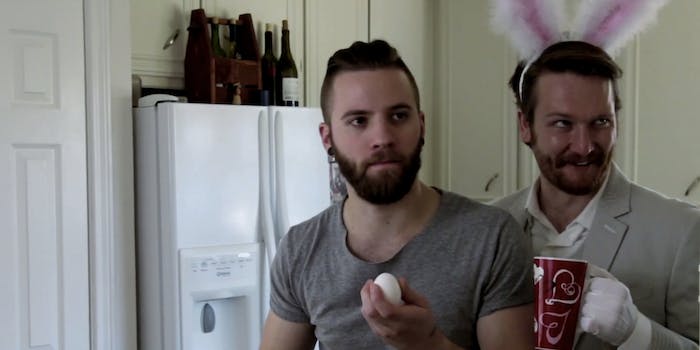 If you think your roommate is obnoxious, you haven’t seen this

This man/bunny goes above and beyond.

If you’ve got friends who got overexcited about their Easter egg hunts, then this new YouTube sketch might hit a little close to home.

New YouTubers Grant and Cody created “The Bad Egg,” in which one roommate gets a little overzealous in celebrating Easter, hiding fresh eggs all over the house for his exasperated roommate to find before he can cook his breakfast.

The locations get more and more ridiculous as the hunt goes on, and there’s a kicker that we won’t ruin beyond saying it’s slightly NSFW. While this is the first video comedians Grant and Cody have released on their channel, they clearly have an eggs-travagant future ahead of them.

Screengrab via Grant and Cody/YouTube