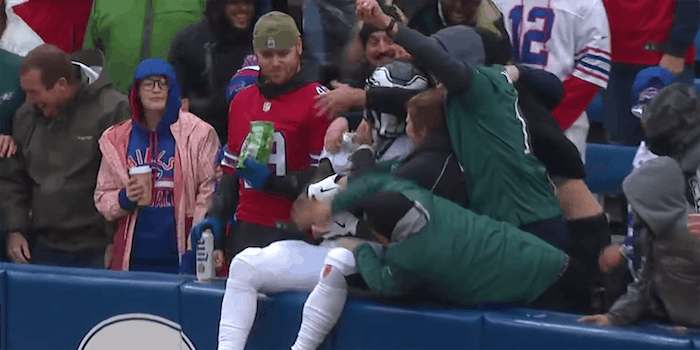 How to stream Eagles vs. Bears live

An uneven Eagles team meets a freefalling Bears team as both squads try to find their footing.

It’s hard to tell what Philadelphia Eagles team will show up from week to week. Fans, of course, are hoping it’s the productive version of this offense that takes the field against the Chicago Bears on Sunday.

Despite their high level of talent, the Eagles have struggled this season. At 4-4, Philadelphia is a team that can get blown out by the Cowboys one week and dominate the Bills the next. The most glaring issue for the Eagles offense has been the passing game. Though Carson Wentz has played decently well, he has been undermined by a lack of receiving talent.

While the running game has been better in recent weeks, the committee in their backfield has been hit and miss. Jordan Howard and Miles Sanders seem to have figured out their roles in this offense, but they could both stand to develop a little more.

Philadelphia’s secondary has given up some big plays this year, and the Eagles have rotated personnel in hopes of getting things under control. Though they have some good players like Fletcher Cox up front putting the pressure on, the defense gets deflated when the secondary fails. With poor secondary play and various holes across this defense, it’s a wonder they are still 15th in Defensive DVOA.

Despite the Eagles flaws, this is a winnable game for Philly. While Chicago’s defense has maintained its excellent play despite tough losses, their offense is terrible. It’s hard to find a good Mitch Trubisky game this year and his awful play has really held both Chicago’s passing and rushing attack.

Even in their last game, when the running game really got going, the team still fell short as Trubisky barely managed 200 yards through the air. The challenge with this Bears team is that with Trubisky under center, the defense has to be perfect. Though this unit is ranked 6th in Defensive DVOA, weak points like safety Eddie Jackson can cost the team games when the offensive ceiling is so low.

Philadelphia could very well find a way to lose this game. They’ve lost to equally bad teams before. However, this Bears offense can’t seem to keep pace with anyone. If Carson Wentz and company are just somewhat effective, it could be enough to put the Bears down.

There are a number of options for watching Eagles vs. Bears on streaming platforms that carry FOX. However, consult a coverage map to see what game your regional channel will be playing.

Eagles vs. Bears live stream: How to watch NFL online

Jordan Howard and Miles Sanders, Running Back: With the receiving corps in disarray, both of these backs have been fantasy relevant in recent weeks. Howard tends to lead in rushing yards, but Sanders catches passes to pad his stats. Both are worthy of a look in most leagues.

David Montgomery, Running Back: Though the Eagles have been decent against the run, it seems like the Bears want to get the offense running through Montgomery going forward. After last week’s amazing game, you’ll feel dumb if you leave him on your bench again and he goes off.

Philadelphia Eagles vs. Chicago Bears: Why it matters

A loss for either team here could cripple its season. The Eagles are trying to catch up with a Cowboys team that is better than their record. Philadelphia can’t afford to lose too many games if they want to keep their playoff hopes alive.

Chicago is the worst team in the NFL’s most competitive division. While they are 3-4 right now, a .500 record isn’t going to be good enough to stay relevant in the NFC North. Another loss or two and their season is officially over.

If this Eagles team is actually going to make the playoffs, they have to beat the Bears here. You can live with losses to the Cowboys and Vikings, but too many Ls against bad teams could cut things short in Philly.

The Eagles have the advantage, but they need to execute. Let’s see if Philly can finally start playing up to expectations.