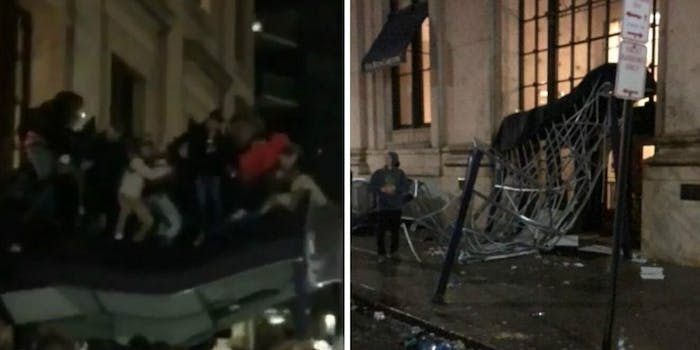 This was so dangerous.

In preparation for the Philadelphia Eagles possibly winning the Super Bowl, the city which is known for its, um, passionate fans splattered hydraulic fluid all over its light poles to prevent people from climbing them in celebration.

Unfortunately for the Ritz-Carlton hotel, there was nothing to stop more than a dozen Eagles fans from destroying its property after Philadelphia’s exciting victory vs. the Patriots.

Hardly anybody does it better (or worse) than Eagles fans when it comes to acting unruly and vandalizing other people’s property in the name of sports victory. For proof, look no further than these videos.

People are doing backflips and jumps off the Ritz-Carlton! #SuperBowl #FlyEaglesFly pic.twitter.com/rFOzhL1T0k

Apparently, the strongest of hotel awnings can’t hold up football fans that are intent on crashing it—and themselves—to the ground.

The Ritz canopy has collapsed pic.twitter.com/9LBolLtIPY

Meanwhile, in Philadelphia: a play in three acts. pic.twitter.com/e9ibHKwL1M

The Ritz-Carlton wasn’t the only destination for Eagles fans to get wild. As noted by 6ABC, fans flipped at least one car …

Post #SuperBowl celebrations in Center City are getting rowdy as people are seen flipping a car. http://6abc.cm/2nEZUk5

The gates of Philadelphia’s City Hall. Yes, that’s a keg on its way up. pic.twitter.com/JSANa3Wodw

And, for some reason, stole a police horse.

So far in Philly tonight: a police horse has been stolen (one recovered), an off-duty cop has been arrested, Looting at Macy’s, countless people on light poles, Ritz Carlton awning has collapsed, and the rocky statue will likely fall by the morning. #phillypolicescanner

As far as we know, the city’s iconic Rocky Balboa statute is OK, though the same can’t be said for the Liberty Bell.

Nope there is a crack in it.

Through it all, the Ritz-Carlton’s Twitter account seemed blissfully unaware Monday morning of the havoc that had been raised and the destruction that had been caused.

We're ready to offer you some peace, relaxation and romantic moments. While your children enjoy their own mini-vacation at our #RitzKids club. https://t.co/FXXqyYDYek pic.twitter.com/dmPPCODnLD

Luckily, we all learned an important lesson from the collapse.