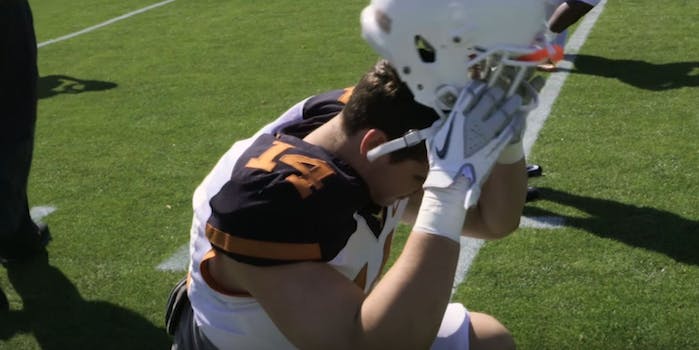 The college football star who stumps for Trump

The most misunderstood Texas Longhorn is not sorry.

Senior Dylan Haines has been an underdog for four years.

He’s a leader on an under-performing team that may fire its coach this weekend. When students at games wear “Make Texas Football Great Again” hats, it’s in part a reaction to guys like Haines.

As a walk-on starter at the University of Texas, his presence on the field frustrates fans who long for glory days when the school regularly produced NFL-ready defensive backs. “DBU,” they used to call the Longhorns.

Then there’s that whole Trump thing.

An outspoken Republican on a team of mostly African-American students who vote Democratic, Haines frequently voices his political opinions to his more than 4,000 Twitter followers.

Sometimes things get heated. Sometimes he seems sad about it.

“Knowing that a lot of UT students are mad at me… It’s fine. It’s not that I don’t care, but people are free to have their own opinion,” Haines tells the Daily Dot.

Haines grew up in a fairly moderate family in Austin, Texas. With both parents former Texas athletes, as well as his brother, UT football was a lifelong dream. Getting on the field, however, proved difficult.

Playing almost every position at Lago Vista High School—a lowly 2A institution in a football factory state where 6A schools battle for glory well into December—did not attract many college scouts to Haines. He sent highlight videos of himself across Texas, but after several rejections, Haines decided to walk on.

A tweet this month toasting President-elect Donald Trump’s win resulted in backlash from students and Longhorn fans alike. In it Haines wrote: “To the people tweeting #NotMyPresident, feel free to leave. Here’s a list of everything this country owes you,” followed by a photo of a blank sheet of paper.

Several found it offensive, and responded directly to Haines, asking him if U.S. citizens did not deserve basic human rights. Others came for his football stats and attacked his career.

“I got a lot of people asking had I read the Constitution or the Bill of Rights. Obviously. You can get that from a 5th grade history lesson,” Haines says. “People thought I was saying people don’t deserve equal rights and that women don’t deserve equal rights. Which is just not true, but that’s why I think Twitter, since you have such limited space, it’s not the best place to make a statement like that so obviously I learned a lesson.”

With so many users in his mentions, and about 8,000 retweets, Haines wrote an iPhone note and explained himself:

He wrote that he would not apologize for the tweet. But after being consulted by someone higher up on the team, he says he decided to delete it.

Haines gained an interest in politics after starting college. As an economics major, he studies international trade and investment. After graduation, he plans to pursue a masters in advertising.

Haines says as a UT student, he became more aware of policies that would affect him upon graduation. Despite Haines leaning conservative, he adds that his news is apolitical.

“I want to see every side of the story, I want to see the data behind the claims of people on the left and right. So I follow news sites and political commentators on both sides,” he says.

He says that his outspoken views don’t cause any problems with his teammates or coaches. That UT’s middling .500 season, plagued by close losses, is not a product of a divided locker room.

Even after the deleted tweet, Haines says his teammates were not upset.

“I got a lot of people asking ‘What do the people in the locker room think of this?’ ‘How do you say this when you play on a team with a lot of minorities?’ So I guess people were assuming that everyone in the locker room basically hated me because I supported Donald Trump, but that’s not the case, they could not be more wrong,” said Haines.

Two sources on the team tell the Daily Dot that Haines’s rants have caused separate discussions and anger toward the player. One source said he has been so angry at Haines’s political arguments, and point of view, that he wanted to fight him.

But Haines says he enjoys the banter. With no history of fights breaking out, he sees this as an opportunity to educate friends while learning about the opposite view.

“Anything I say or claim is going to be backed up, so it’s kind of fun to debate political issues with my teammates. Some will agree with me, some will disagree, and at the end of the day, that’s OK, because everyone is free to believe what they want,” says Haines.

Even outside the locker room with strangers, the football player is still willing to debate. He gets attacked with blanket terms—unfair ones like “racist,” vague but perhaps accurate ones like “privileged”—but the name-calling only strengthens, as Texas coach Charlie Strong puts it, his core values.

“I don’t get offended by anything someone says to me. I just take it as, they believe that, and it’s fine,” said Haines.

For a safety who plays sheriff on the field, patrolling the play and running toward the action, that seems like the right attitude.