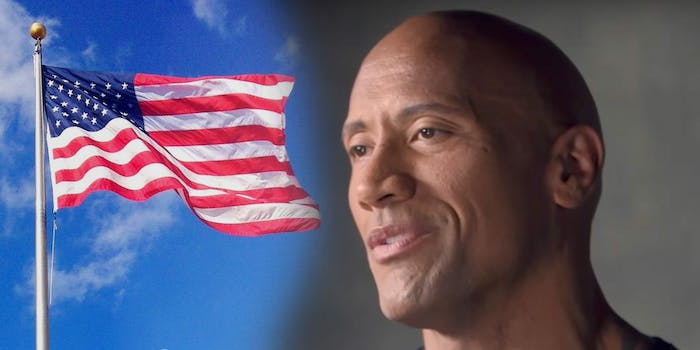 The Rock is interested in being president, but we know nothing about his politics

Where does the Rock stand on the tough issues?

If there were ever an inherently kind and lovable guy, it’s wrestler-turned-actor Dwayne “the Rock” Johnson.

That super awesome guy recently told GQ in an interview that running for president is “a real possibility” that he has definitely considered. While Johnson has been stealing our hearts for decades now, we still don’t know much or anything about his political leanings.

Let’s start with what we do know from GQ’s recent profile of Johnson.

Johnson said he was adamantly against the so-called Muslim travel ban, even though he “believe[s] in” national security. He says he believes inclusion of immigrants to be a foundational pillar of the U.S. and needs to continue being a part of our culture.

Johnson also implied that he’s not a fan of President Trump’s communication strategies or rashness, but did not comment on his political decisions.

The recent interview seems to be the only real information we have on Johnson’s opinions, though he’s been a well-known star since the ’90s.

In 2014 a scene from Pain & Gain, an action film that starred Johnson, was used in a campaign video without permission for Republican New Jersey Gov. Christ Christie. Though Johnson is a registered Republican, he quickly contacted Christie and asked for his name, image, and likeness to be removed from the video. It’s fair to say, though, that this instance still may not have had anything to do with politics.

Johnson also said he has friends “on all sides” and he considers Christie, Barack Obama, and Bill Clinton “buddies” in a 2014 interview while promoting Hercules. We first learned Johnson liked Obama in a 2009 MTV interview, but with Johnson’s personality, it’s still very likely his “like” for Obama has nothing to do with politics.

We also know that Johnson was asked to speak at the Republican National Convention in 2000, but also attended the Democratic Convention later that year.

Even more frustratingly, the guy’s never once contributed to a political campaign or PAC.

While we desperately put together the giant, chiseled Johnson jigsaw puzzle, at least we can see him on the cover of GQ in June.