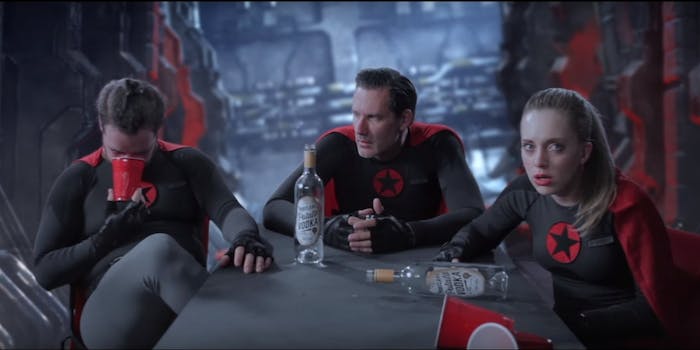 It's the webseries equivalent of William Hung.

Here’s a tip for any would-be performers out there: If you’re having a better time than your audience, then you’ve failed. It’s a maxim that could have prevented all the effort making The Drunk Series, a multi-genre collection of shorts that replicates the tedium of being sober at a party where a swarm of sozzled fools all try and remember the plot of Lost.

The series—which is written and performed drunk by a group of Portland actors and filmmakers—has its foundations in a short from a couple of years ago, Star Drunk, that you may well have seen. And just like the puppeteer behind William Hung, they’ve decided to extend an unlikely one-off success into something bigger, the predictable result being a magnification of just how threadbare the central idea is.

Ah, you say, but what about Drunk History? That’s pretty funny, right? And yes, it is. But the differences between the two highlight just what’s wrong with The Drunk Series.

For starters they deviate on their intended sources of humor. Drunk History derives its laughs from the contrast of having straight actors playing out the spiraling ramblings of the inebriated storyteller. But The Drunk Series relies entirely on the hope that people being drunk is, in and of itself, funny. And sometimes it is. But it’s usually only funny when you’re drunk as well.

Another major difference between the two series is that Drunk History is filled with actors and comedians that you may well know. So at the very least there’s an intrigue as to what those people are like when wasted.

But when you have a no-name cast expecting continual laughs just because they’re slurring their lines incomprehensibly, it’s less intriguing than insulting and arrogant—insulting to a crew that have shot and edited this series better than it deserves and arrogant in the expectation that people will watch actors they’ve never heard of purposely performing below even their own standards.

One time was fine. Any more will drive you to drink.