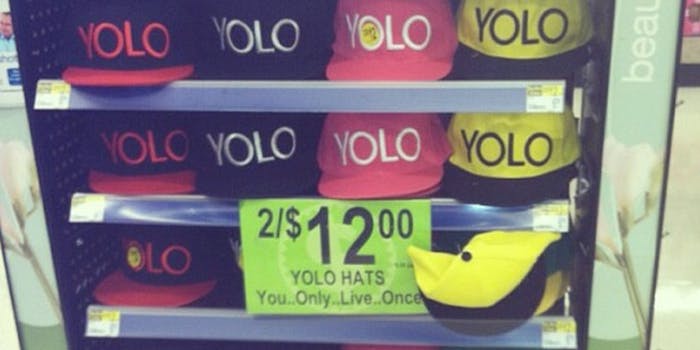 Drake calls out Walgreens and Macy’s for selling YOLO gear

The rapper, who brought the phrase "YOLO" (You only live once) to prominence with his song "The Motto," took to Instagram to point out companies who profit from it.

Noted millennial scholar/rapper Drake bolstered the phrase “you only live once” (a.k.a YOLO) into the pop culture vernacular… and he wants to get paid for it.

Drake spent his Christmas Day putzing around Walgreens and Macy’s lambasting the stores for selling YOLO-embroidered merchandise without cutting him a “cheque” (Canadian-speak for check). Drake takes great pride in using YOLO generously in his song “The Motto.”

On Instagram, he posted a picture of a rack of tacky, neon-colored hats proclaiming YOLO which prompted a response from the former Degrassi actor: “Walgreens….you gotta either chill or cut the cheque.” He issued the same warning for Macy’s, accompanied by a picture of a YOLO T-shirt with Charlie Brown and Snoopy.

Drake’s ultimate aim here is unclear. Perhaps he thinks he’s entitled to instant royalty cheques to anything and everything that has YOLO printed on it. But we do know that Drake doesn’t hold the YOLO trademark. Gawker notes that more than 100 trademark applications have already been filed in the race to cash in on the YOLO craze.

A blog post on Virtual Thesaurus concludes that YOLO has been in use for commercial purposes since 1993 by a company called YOLO Gear. Also, YOLO predated Drake’s usage when the phrase was shown on an episode of ’90s Nickelodeon cartoon Hey Arnold. It was also in contention to be named 2012’s Word of the Year by the Oxford American Dictionary, but that prize went to “GIF.”

So, sorry Drake. In this life, you will probably not be getting paid YOLO-induced royalties—but you should take comfort in the fact you created an insufferable Tumblr hashtag used by anguished teens.