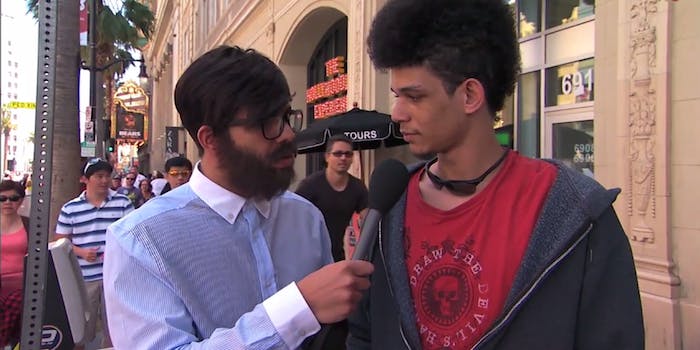 This is the best installment of Jimmy Kimmel's "Lie Witness News" ever.

Drake indulged Jimmy Kimmel Live Thursday night with a prime real estate, six-minute version of “Lie Witness News.” You’ve seen these: a correspondent in the field prays on the accommodating and fame-chasing nature of people by asking them about fictional developments, only for the interviewees to nod along while America laughs at their vanity and dishonesty.

The twist for this “Lie Witness” segment is that Drake would be gauging his popularity by asking strangers about Drake.

“In person people are nice, because you can punch them in person,” Kimmel says.

And so our hero dons glasses, a beard, and a mop-top wig to ask unsuspecting civilians about … Drake and his hosting of the ESPYs on July 16. “It’s almost like when Tom Sawyer went to his own funeral,” Kimmel adds.

Here’s where Drake wins: His impromptu questions are razor sharp and hilarious. A sample:

“How do you feel about Drake refusing to acknowledge Caucasian athletes at the ESPYs?”

“How do you feel about Drake publicly urinating at a Baby Gap?”

“How do you feel about Drake singing ‘As Long As My Bitches Love Me’ at Malia Obama’s birthday party?”

“How do you feel about his surprise performance at Coachella where he’ll be airing his sex tape on the screen?”

Drake captures folks at their most dismissive and casually racist with respect to hip-hop (“They all do that”) but ends on a sweet note when he surprises an unsuspecting fan.

And since it’s Friday, here’s a throwback Drake playlist to get your weekend started.