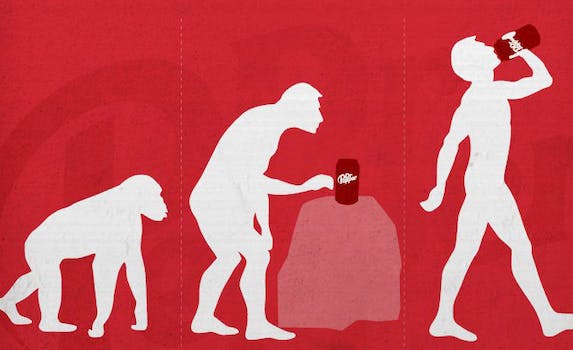 The comments on a March of Progress ad posted Thursday quickly devolved into a debate on Darwinism.

It seemed like an innocuous, funny ad for a soft drink. But it ended up drawing the worst stock characters on the Internet.

Whoever manages Dr Pepper’s Facebook page probably didn’t think that posting an ad riffing on the famous “March of Progress” diagram, which illustrates the progression of human evolution, was anything but a joke that promoted its product.

While they invoke Poe’s Law, meaning it’s impossible to tell if they’re real or just quality satire, dozens of purported creationists flooded the comments section of the ad on Thursday, condemning it for supporting science. Or at least for referencing a scientific principle for a visual joke.

“No we didn’t come from apes,” wrote Tina Litchfield. “If we came from apes why is there still apes.”

“Dislike!!!” exclaimed Felicia Kirts. “I DO NOT believe in Evolution or Darwinism! Its false!!”

“if Dr. pepper wants business from thousands of people they will need to appoligize,” threatened Matthew Cooper. “i have connection with colleges that they carry them and they will quit selling Dr. Pepper at their college appoligize within 24hrs or you will have lost ALOT of customers.”

Amid the raging debate, though, a few users were more concerned with what Dr Pepper does to your health.

“no matter what you believe in, you shouldn’t be drinking soda,” wrote Brendan Garcia.