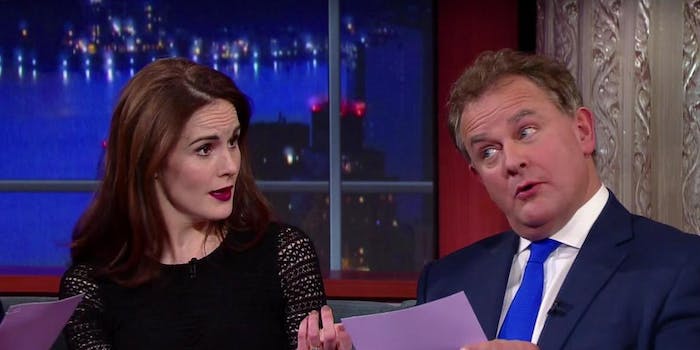 This isn't the 'Downton Abbey' you're used to watching.

One of the reasons that Downton Abbey has been so successful over the years, especially in America, is because of the charming accents that come with a British costume drama. (Also, Dame Maggie Smith. Enough said.) But what happens when you take all of that classiness away?

Stephen Colbert had Michelle Dockery (Lady Mary Crawley), Hugh Bonneville (Robert Crawley, Earl of Grantham), and Allen Leech (Tom Branson) on The Late Show, where he had them read an actual scene from Downton Abbey with authentically classless American accents, just to see what would happen. And it does not disappoint.

Would we have cared as much about the petty problems of the Crawleys or any of their servants if they lived in the United States? Almost certainly not, but for a moment, it’s fun to imagine what—thankfully—never was.