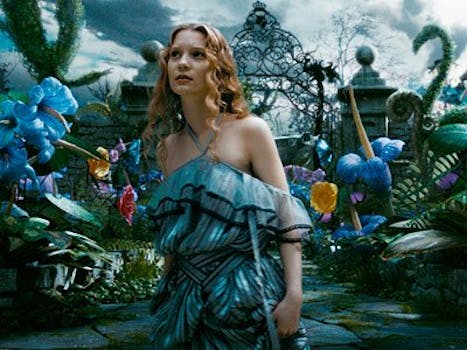 Welcome to Silicon Valley, where fiction is stranger than truth.

Alice laughed. “There’s not use trying,” she said: “one can’t believe impossible things.”
“I daresay you haven’t had much practice,” said the Queen. “When I was your age, I always did it for half-an-hour a day. Why, sometimes I’ve believed as many as six impossible things before breakfast.”
—”Through the Looking-Glass,” by Lewis Carroll

Silicon Valley is a kind of Wonderland, with every entrepreneur an Alice. The longer you’re here, the more you’re asked to casually believe all kinds of whoppers.

If the truth is stretched from time to time, it’s just a warp in the space-time continuum caused by the gravity of tech execs’ egos.

For a small example, look no further than Sheryl Sandberg, Facebook’s chief operating officer, whose profile as the company’s business chief looms ever larger as the social network prepares for a widely expected public offering on Wall Street.

Oh yes, it’s small—smaller than Alice after she drinks from the bottle—but I was struck by this bit in a profile of Sandberg in the San Francisco Chronicle, for which she didn’t deign to sit for an interview:

“Through Facebook’s public relations department, Sandberg has declined repeated requests during the past year for an interview about herself because she prefers to talk about the company.”

Got it! She’s so modest. It’s all about the company! Which is why we saw Sandberg sit down to talk aerobics outfits—remember those headbands?—with Jesse Draper, the bubbly if inconsequential host of the Valley Girl Web talk show.

And why Sandberg granted an interview to Fortune about all the non-Facebook causes she’s promoting at the World Economic Forum.

Because it’s all about the company, remember?

Now if Facebook’s PR department had just said, “The Chronicle? Seriously?” That I might have believed.

Sandberg is just one example of the tale-tellers of tech. Google CEO Larry Page was caught fibbing about Google+, the company’s fledgling social network. In reporting the search engine’s earnings to Wall Street, he attempted to suggest that a large percentage of Google’s users were active on Google+.

By that standard, I guess Kim Kardashian counts as an active Google+ user because she receives Google Alerts every time someone mentions her name. (Hi, Kim!)

Or how about Apple CEO Tim Cook? In a recent email to employees, the gadget boss insisted that “if a manufacturer won’t live up to our standards, we stop working with them.”

Not true. How do we know this? Apple’s own reports on its supply chain. As the New York Times reported this week:

“More than half of the suppliers audited by Apple have violated at least one aspect of the code of conduct every year since 2007, according to Apple’s reports, and in some instances have violated the law.”

Perhaps Apple stops working with the suppliers for a second, and then immediately resumes? There’s some definition of space and time, surely, in which Cook’s statement is true. I just don’t think it’s particularly Einsteinian.

Perhaps that explains the dangerous explosions at iPad manufacturing plants.

On the bright side, Cook announced that Apple employees would get a $500 discounts on Macs and $250 on iPads. And guess what? Even if Apple’s contract manufacturing workers in China were eligible for those discounts—which they aren’t, since they technically work for outfits like Foxconn and Pegatron—they’d still have to work a month or more to buy one of the gadgets they build for Western consumers.

See what I mean about Wonderland?