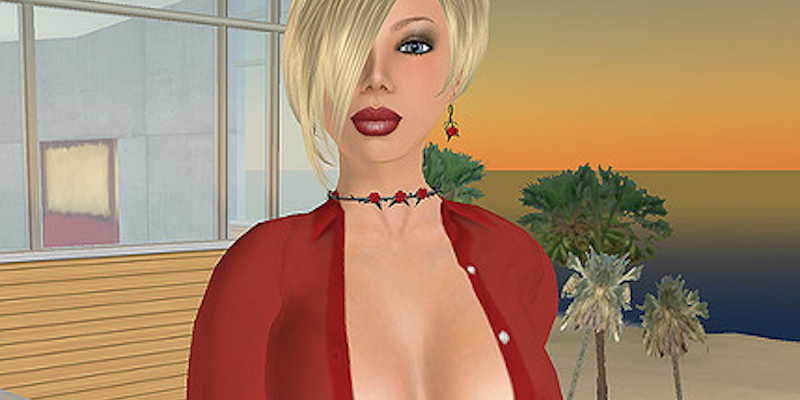 Dot Dot Dot: Can a real civilization emerge from the ephemera of the Internet?

Small businesses, a currency, bank robbers, artists, a (literally) shared religion: Is this the start of a truly online civilization?

The founders of Second Life sought to create a new and complete world, an alternative to our corporeal reality. It turns out they needn’t have bothered. That world already exists, and it’s called the Internet.

Inspired by others, Alejandra Gaitan was the first person to create a dedicated reply girl channel. And who can blame her? She’s making five reply videos a day that get clicks through the cunning use of SEO magic and her cleavage. Did you click on this story because of the image? Be honest, now… She claims to be making $15,000 per month. Not bad for a 24-year-old college dropout.

YouTube is unable—or more likely, unwilling—to stop the reply girls entirely because of the collateral damage that would incur. But Gaitan is herself trying to get out of the game. She’s tired of the haters—whether it’s the feuds with other reply girls or the general hating that her videos inspire. Ironically, it is the haters that make her so successful. “Haters are one of your most loyal viewers, it’s true,” she told us.

An active member of hacktivist collective Anonymous revealed this week that, well, it doesn’t really need to do a heck of a lot of hacking these days. Leaking is all the rage, you know. Ever since Bradley Manning became famous for allegedly releasing diplomatic cables to WikiLeaks, Anonymous can just sit back and wait for some system admin to come to them with the “keys to the kingdom.”

The bank robbery was a staple of old Westerns. And it’s not as if bank robberies don’t happen today, but where are the likes of Jesse James, Butch Cassidy, and Billy the Kid? Online, that’s where. Rob a physical bank today and you walk away with a negligible amount of money. Not so on the Internet.

Our modern day Willy Suttons hacked Bitcoinica and made off with 18,547 bitcoins. There are a little over 9 million bitcoins in circulation today, so that’s about 0.21 percent of the total bitcoins out there. To put that in perspective, consider this: there are about 2.25 trillion U.S. dollars in circulation, so .21 percent would be about $4.7 billion. (The largest U.S. cash bank robbery in history was a holdup of an armored car depot that netted the robbers $18.9 million.) Now THAT is outlaw movie-worthy.

A blog started in early 2011 dedicated to the art of instagraming has spawned 260 local groups for Instagram enthusiasts. But already, the community is concerned that the popularity of the year-and-a-half-old artistic medium is ruining it. No longer is the “popular” section of the instagram site a showcase of great art. It’s been overwhelmed by “poor quality” pics, uploaded by “newbies.”

Instagram takes a certain amount of flak for making it too easy to make pretty pictures. It can’t be art if it’s that easy. And yet MY instagrams never look as good as these. (And neither do the popular ones, apparently.)

And while we’re talking about art, there’s a kind of human found-art project going on over on Tumblr. An artist is posting flyers in cities and towns all over the U.S. (and soon the world) inviting people to call a number and leave a message with a song, a poem, or just a thought. He’s posting the best on a blog.

It’s a Internet-age parable about the life well lived. It is often attributed to writer Mary Lynn Plaisance. The story’s been online since 1995 and the most recent version’s 30,000 shares make Plaisance a kind of Internet Socrates, or Krishna, or Christ.

Is the Internet, as the Anon implies, a “kingdom”? (Or is it just “a series of tubes”?)

There’s evidence to suggest that it is. You’ve got small businesses, its own currency, bank robbers, artists, a (literally) shared religion… It sounds like a country to me.

It’s a wild-west frontier, a dark-ages kind of country to be sure. The old, geographical governments work on regulation like Cyber Intelligence Sharing and Protection Act (CISPA), and we rage and protest. But the wild west will come to an end.

Kirsten Bischoff argues that the reason Facebook truly is worth in excess of $100 billion is that the Internet is the largest nation in the world-—and Facebook as its government—is exactly the vision of its founder and investors. They intend to claim this new land in the name of profit and bring order. Which, I suppose means we should all hail King Zuck.

Not that I’m complaining. Kings mean a couple other things too: Court jesters, for example, complete with funny headgear and a parody Twitter account, @ZuckerbergsHood. They also mean a press (like the Daily Dot) to keep them honest—or at least sit on the sidelines and take pot shots.