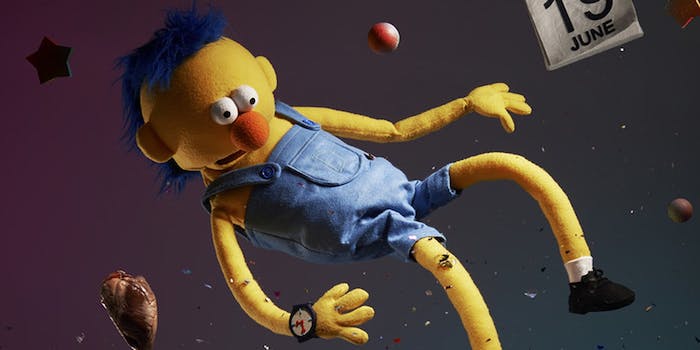 Prepare to be terrified all over again.

The prize for most disturbing Kickstarter video surely goes to Don’t Hug Me I’m Scared.

British filmmakers Becky and Joe racked up over 20 million YouTube views with their first two Don’t Hug Me I’m Scared videos, which show a group of Sesame Street-style muppet characters learning about time and creativity. It sounds like pretty typical children’s TV fare, until you actually watch them and discover that Don’t Hug Me I’m Scared is a surreal hellscape that no child should ever be allowed to watch.

Now, Becky & Joe have launched a Kickstarter campaign to fund four new episodes for YouTube audiences, using a video that shows their muppet characters tied up in a basement and forced to read a ransom note.

The series started life as a weird art project by a pair of indie filmmakers, but thanks to its viral success, it’s attracted a worldwide audience of people who draw fanart and dress up as the characters.

Along with being a pretty snarky satire of Kickstarter media projects (“Pay up or you’ll never see your faves again!”), the ransom video has evidently been successful. With one day to go, Becky & Joe have gone past their goal of $163,000, although unfortunately this cannot cushion the filmmaker from the risks and challenges listed on their Kickstarter page: “failure,” “death” and “nothingness.”