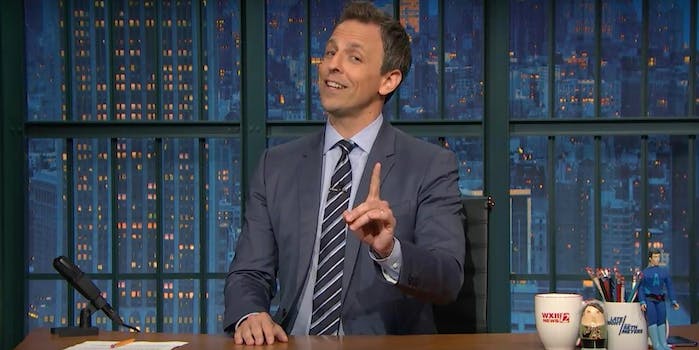 In an unprecedented move in late-night TV this election season, Seth Meyers on Tuesday banned Donald Trump from appearing on Late Night. Now, the presidential candidate is taking some jabs of his own.

Meyers’s Trump prohibition came after came after the Republican presumptive presidential nominee banned the Washington Post from covering his events over its coverage of his response to the Orlando shooting. And now, Trump is firing back at Meyers with a rather predictable blow.

Trump responded to the ban in a statement by criticizing Meyers’s ratings and noting that Meyers desperately wanted him on his show.

“He has begged me to do the show for the last two years. I have told him emphatically ‘no,’” Trump said. “I only like doing shows with good ratings, which as everybody knows, I only make better (by a lot).”

As the Wrap points out, Meyers is actually doing pretty well for himself—especially considering his show starts at 12:35am ET. He averages approximately 1.58 million viewers and .5 rating in the key 18-49 demographic, and he consistently beats his main competition, James Corden’s Late Late Show, in the ratings. And according to recent numbers, Meyers has better ratings than many of the cable news programs Trump appears on or calls into. (That said, cable generally has lower ratings than the networks due to accessibility.)

In response to Trump’s dig, Meyers doubled down on the ban in Wednesday’s episode, telling his audience that “it takes an amazing amount of courage on our part” to ban a presidential candidate who probably had no interest in ever appearing on his show.

“So, ball is in your court, Donald,” Meyers said. “Either rescind your Washington Post ban or you’re not allowed to appear on a show that you have no interest in appearing on. Although, maybe now that you can’t have it, you’ll changing your mind.”

Meyers’s feud with Trump is completely in-character for someone who’s turning his show into must-see political late-night—but it’s still a big move when ratings talk.