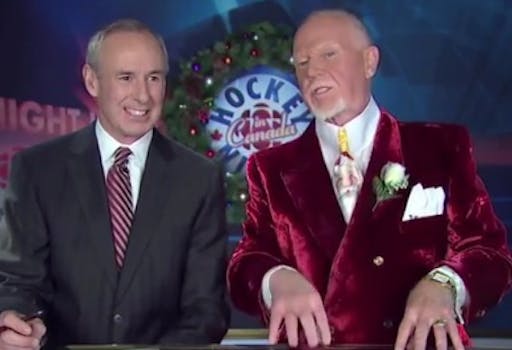 One enterprising YouTuber played up the fact that Don Cherry's hands do  look like they're about to plunk down on a piano keyboard.

Canadian ice hockey commentator Don Cherry, who tends to speak with his hands in a very animated fashion, has inspired one YouTuber to vastly improve one of his TV appearances.

In a video titled “Don Cherrys Piano Desk” RBFlicks has added a discordant piano cord every time Cherry’s hands descend upon his desk. The effect: it looks—and sounds—like Cherry is actually playing a piano as he speaks.

Uploaded four days ago onto YouTube, the video had barely broken into the thousands, despite at least three threads on the social news site Reddit. The fourth Reddit post, from today, seems to have done the trick, however. Now the video appears to be well on it’s way to hitting six digits by morning according to YouTube data.

The viral-inducing Reddit thread titled “Don Cherry’s Piano Desk. This is why youtube is amazing…I can’t stop laughing,” currently sits on the front page of the site. That explains the boost in numbers. When redditers weren’t “dying of laughter” they were clamoring for more videos, and more instruments.

YouTubers were equally enamored by it, writing they “lost it” in the first minute and generally found it “hysterical.”

One commenter, of course, had to be a downer.

“Once SOPA﻿ passes the maker of this video will not exist” wrote kimbotube59 in the most liked comment. The commenter was referring to the controversial Stop Online Piracy Act, widely reviled by many Internet users.