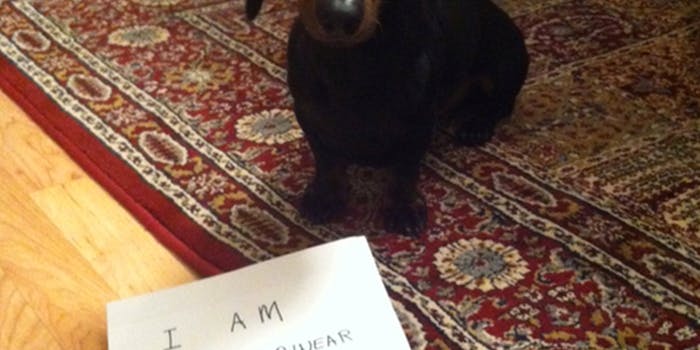 It turns out that the hottest Tumblr of the moment was started by Tumblr's Editor-in-Chief, Chris Mohney, and he doesn't have time to run it. So the site has a (very appropriate) new owner.

Dogshaming, a single-serve Tumblr that publicly humiliates dogs for the horrible things they’ve done, is getting a new owner.

The blog was started last week by Tumblr’s Editor-in-Chief, Chris Mohney, with a picture of a black dachshund sitting near torn boxers with the sign saying “I am an underwear eating jerk!” The picture, also posted late last week, garnered more than 900 notes and quickly circulated throughout Tumblr. Sensing—or sniffing—an opportunity to capitalize off more terrible things dogs have done, Mahoney anonymously created the blog.

After a flurry of press mentions that led to hundreds of submissions and more than 17,000 followers, Mahoney took credit for the blog Tuesday, and said that he was giving up control of the Tumblr.

“What seemed like a fun idea for a weekend of dogshaming humor has turned into a cultural phenomenon, that, sadly, I have neither the time nor inclination to pursue all the dang time,” wrote Mahoney, adding that he didn’t want to shutter Dogshaming. He tracked down the original dogshaming picture and handed the person who posted it control of the blog.

The new curator of Dogshaming does not want to reveal her identity, but was obedient enough to answer some of the Daily Dot’s questions.

She fully supports Dogshaming’s method of plastering guilty dog’s faces on the Internet as a “great way to passively-aggressively vent” about misbehaving pooches without hurting them. Also, she dismissed criticism that dogshaming is cruel way to to scold the dogs.

“I doubt they know they’re being shamed for specific incidents (which makes it SO MUCH FUNNIER),” she wrote. “I do have an inkling that our pets know when we’re displeased with them.”

But with all the cat humping, vomit eating, and racist barking that these dogs do, she said she has more sympathy for the owners than she does for the dogs.

“The owners are the ones dealing with these ‘terrors,’ she said. “It’s hard to feel bad for pets that have derived pleasure from destroying my Marc Jacobs purse.”

She said might change the format (there’s already a new logo), but will continue to post submissions on Dogshaming. But if you want a picture to grab her attention, she revealed her favorite type of entries.

“My favorite submissions have to be the ones where you catch the pet in the act or shame them with the item they’ve destroyed (underwear, toilet paper, couches),” she said.

She will keep updating the blog until “there are no more dogs to be shamed,” she said. “Which might be a while!”