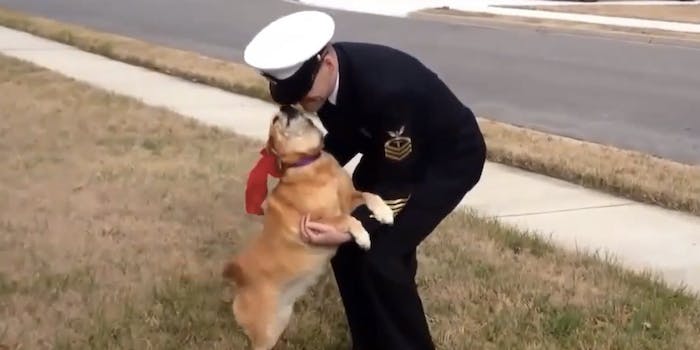 Yes, dogs understand what it means when their owners come home from war

When dogs are reunited with their owners, it tugs at our heartstrings. It’s a classic YouTube trope, one that is even more heartwarming when you combine the excited pups with recently returned soldiers. But are these animals really remembering their humans, or are they just being dogs who’d be happy to greet any human?

According to a recent Pacific Standard article, there might be more to canine greetings than you’d assume. The dog may not remember the human in the way another human would, but using their senses they can often tell who is around them, even if the person has been gone for a long time. They use sight, sound, and smell to associate the emotions they feel with their surroundings. For the return of a known human, that emotion is excitement, and it manifests itself in typical greeting behaviors.

“They basically assess this complex of sensations, which is in fact a person,” Stanley Coren, professor emeritus at University of British Columbia and author of The Wisdom of Dogs, told Pacific Standard, “and that will trigger the emotion.”

While there’s no evidence that shows dogs reacting more strongly to a human who’s been gone a long time versus a short one, dogs can pick up on the atmosphere around them to understand the level of excitement and emotion of a situation.

“One of the things that’s clear from videos with soldiers is that the soldiers and families are all wired too, and the dogs pick up on that,” Marc Bekoff, author of Why Dogs Hump and Bees Get Depressed, told Pacific Standard.

So next time you tear up as a soldier’s dog welcomes him home, know that the dog’s emotions are just as genuine as yours.