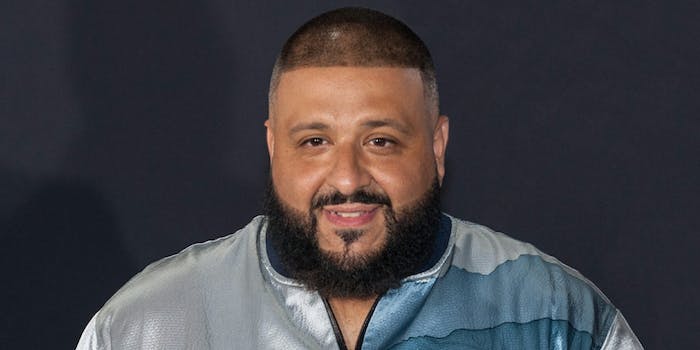 In a 2014 interview, Khaled said the 'rules' are different for men.

If you clicked to see why DJ Khaled was trending on Twitter today then you definitely discovered that it is because he said he does not go down on his wife.

In a recirculated 2014 interview from The Breakfast Club, the man famous for using his mouth to repeatedly say his own name in songs revealed that not only does he not go down on his wife, he seems fairly repulsed by the idea. What if his wife decided that she doesn’t want to go down on him? That’s different, because he’s the “king” and also “we the king,” as he says at one point; there are different “rules” for men.

And then came the great swooshing sound of thousands of eyes rolling and takes forming.

And while there were some unoriginal jokes about Khaled’s weight, men and women seemed to be equally mad about this regressive view (and also mad that they now know about Khaled’s sex life).

It’s sad that he equates sex to him achieving his role in a power dynamic, which likely is not include mutual pleasure pic.twitter.com/ZH1WvtmFGV

Richard Marx stepped in to let everyone know he definitely eats.

Smash Mouth did too, but they’re known to be pro-pussy-eating.

A King who doesn't is no King at all. https://t.co/Jg1GAlfIjI

this year is improving at speed pic.twitter.com/Bmjai8wluB

There were also side-revelations about what Smash Mouth means.

This Snapchat of Khaled’s wife, Nicole Tuck, telling him to shut the fuck up provided some balance.