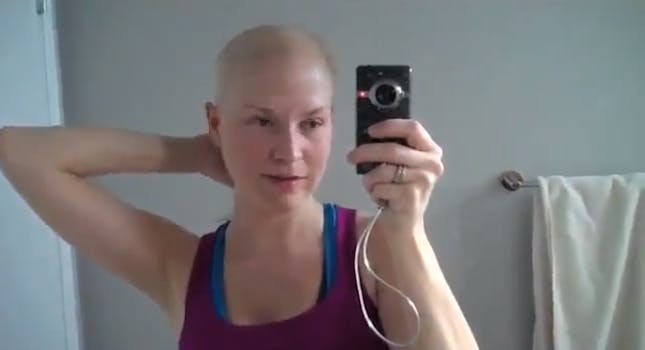 Former MTV star Diem Brown is used to life in front of the camera, but her latest journey has been far more personal.

Brown, who is battling ovarian cancer for the second time at age 30, decided to film her chemotherapy hair loss experience after discovering a lack of sites for cancer patients undergoing the process on the Internet and getting some inspiration from Melissa Etheridge. Released Oct. 18, the video has since garnered more than 260,000 views.

Viewers watched Brown’s intimate brushing ritual as large clumps of her hair fell out before her eyes, and at one point she broke down.

This time around, she’s calmer—and at times, she’s even able to smile—as she goes from having a small amount of hair to being almost completely bald.

“At first it was frustrating and emotional—but as time went on my hair loss has become my visual proof that the chemo is working and killing the cancer cells in my body,” Brown wrote in a blog for People.

She might not have had much hair left, but she was determined to finish recording her journey in hopes that she can help others not to be afraid of the “unknown” and that things do get better in time.

Unable to brush the last of her hair away, she takes a pair of scissors to cut it off. Afterwards, in the video, she can’t help but touch her head.

“I’m really glad that I was able to film all this,” Brown says.

Brown’s videos have already inspired viewers and some cancer survivors to share their chemo stories in the comments, as well as well wishes.

“Having been thru the same things, I know how much courage it takes to be so open about it, talking and showing what it’s like. I’m sure these videos will help lots of women in the future who will unfortunately face the same thing,” tv9622 wrote.

“My mum has been going through [chemo] and radiation for the past 2 months. i combed her hair off each day and trust me it was painful watching that,” ruthinnocents added.

Brown thanked her readers for their support and wants others undergoing treatment to know that they are allowed to be emotional.

“As patients, you are allowed your moments of screaming, crying and just plain feeling like a crazy person,” she wrote. “Just know you are never alone, that people love and care about you.”