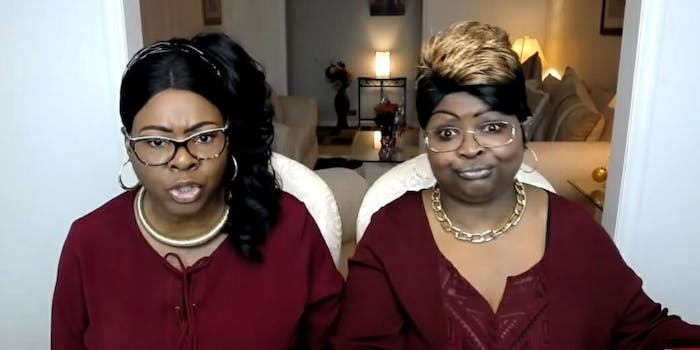 Diamond and Silk - The Viewers View/YouTube

They probably won't have kind things to say.

Diamond and Silk have made their presences known in the conservative media, offering hot takes that President Donald Trump has retweeted and paid for, and bashing Democrats like Joe Biden for not having the guts to run for president.

Now, the two YouTubers who have 146,000 subscribers are headed to Congress to testify about alleged bias against conservative commentators on Facebook, the Washington Post reports.

Earlier this month, Diamond and Silk—whose real names are Lynnette Hardaway and Rochelle Richardson—accused Facebook of censoring their content, and Sen. Ted Cruz (R-Texas) asked Mark Zuckerberg about it when he testified in front of Congress. The Facebook founder said, “In that specific case, our team made an enforcement error and we have already gotten in touch with them to reverse it.”

While being interviewed on Fox News in the aftermath, Diamond and Silk said, “We don’t belong to no gang, so how are we unsafe to the community? … It bothers me. It’s offensive. It’s appalling. … Why are you censoring two women of color? … They’re trying to become a dictator.”

Now, with an invitation from House Republicans, the duo will share their expertise in front of Congress. And you can probably expect Diamond and Silk to continue their Facebook bashing.

As they told Fox and Friends, via Mediaite, “What happened was Facebook reached to us via Twitter—not even their platform—to let us know they had been trying to get in contact with us. We reached back out to Facebook to the email they sent on April 5 deeming us unsafe to the community … We don’t appreciate the smoke and mirrors that they did to us last week making it look like this was a hoax… having people question our integrity. Censorship is not a hoax. It is real.”

According to Bob Goodlatte, chairman of the House Judiciary Committee, Diamond and Silk will participate in a hearing “to examine social media filtering and policing practices.” Facebook, Twitter, and Google have been invited to participate, but as of this writing, none have agreed to attend.

“The advent of social media has made it possible for people to connect across continents, explore vast amounts of information, and share meaningful dialogue with friends and strangers,” Goodlatte said in a statement. “However, this same technology can be used to suppress a particular viewpoint and manipulate public opinion. I look forward to hearing from a wide variety of experts at our hearing to discuss the free speech implications of social media filtering.”