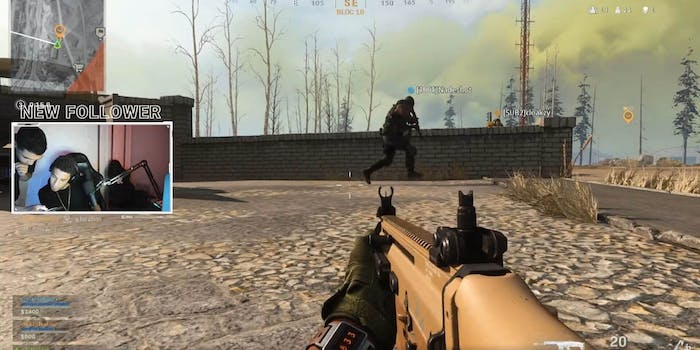 NBA All-Star Devin Booker was off from work on Wednesday night, playing Call of Duty and streaming on Twitch. That’s when he found out the NBA season was indefinitely suspended. And his reaction was priceless.

In the middle of gaming, Booker was informed that his season was put on hold because of the coronavirus impact.

“No way. Let me see,” Booker said to a buddy next to him who then showed him the news on his phone. “What the fuck, bro? Bro. What? What the fuck is going on right now?” Booker sat in silence for several seconds in disbelief.

Then, Booker spent the next minute discovering that NBA star Rudy Gobert and Tom Hanks had tested positive for COVID-19.

Booker made his first All-Star game in 2020, and he won the 2018 All-Star 3-Point contest. He was the fourth-youngest player in league history to accumulate 7,000 career points, and the shooting guard is 12th in the league averaging 26.1 points per game and tied for 20th with 6.6 assists per contest this season.

He also has accumulated a solid following on Twitch, where he has more than 25,000 followers who watch him broadcast himself while gaming. For Booker, it’s been a lifelong love affair with video games.

“Some of my best memories growing up, staying the night at my friends, bringing our whole setups and just staying up through the whole night playing,” Booker told Arizona Sports last November.

Now, considering his day job has been put on hold thanks to coronavirus, Booker will get the chance to stay in that online world as much as he wants.