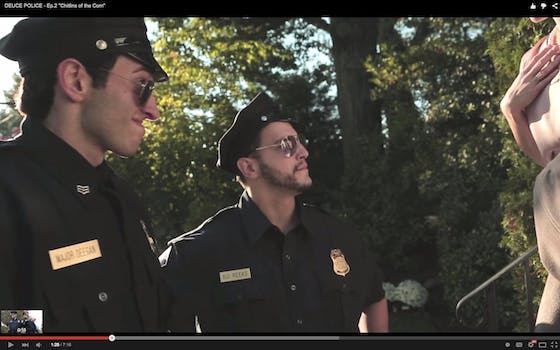 Sure, there's technically a plot here, but this is mostly an excuse for toilet humor.

Most webseries producers would be offended if viewers thought their videos stunk. Deuce Police, a three-part comedy series, is different.

Deuce Police reeks of humor aimed at 10-year-old boys. The premise is that two cops are tasked with investigating offending fecal matters, figuratively and literally. The cops, BO Reeks and Major Deegan, search for criminals who employ Number Two as their weapon.

It’s exactly as mature as it sounds.

Deuce Police isn’t actually as disgusting as your worst fears might suggest, but that’s due in part to YouTube‘s lack of Smell-O-Vision. By and large, the laughs are good-natured, save for episode three, “Son of Toucan Sam,” which rambles on for more than 10 minutes. After the first few comments about random steaming heaps, the plot goes downhill with a bunch of fake news cutaways from BM-TV.

If you need more euphemisms than “number two” for that smellier bodily function, Deuce Police has you covered. Three episodes of this webseries are enough to turn you into a Jeopardy-level champion of poop terminology.

Thanks to Deuce Police, I added “prarie dog” to my schoolyard humor repertoire. And I’m the better man for it.