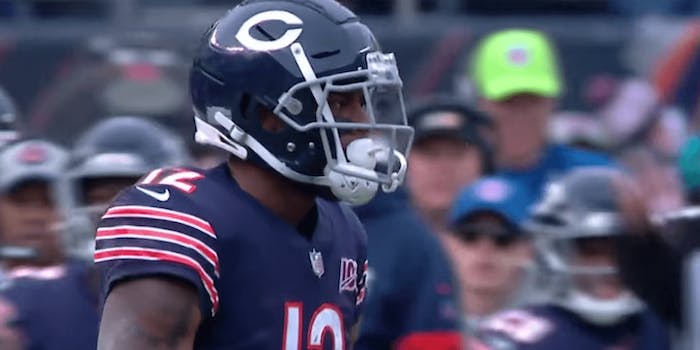 How to stream Bears vs. Lions on Thanksgiving Day

Two the league's worst offenses battle for the NFC North basement. But it sure beats spending time with your family.

Every year, there’s at least one Thanksgiving Day game NFL fans aren’t thankful for. It usually involves the perennially disappointing Detroit Lions. This year, in keeping with this tradition, the Lions will face off against the hapless Chicago Bears.

Unless you are a die-hard NFC North devotee, you might opt to let this game drone in the background as you—uggh— spend quality time your family.

But, we know there are fans out there who will be tuning in, either because of their Chicago/Detroit fandom or because of the numbing boredom that comes with being stuck at your parents’ house after all of your high school friends have moved away and the sweet memories of youth have faded like the autumn leaves. At least there’s football, right?

Neither the Bears nor the Lions have anything left to play for this season. Chicago’s solid defense has been undermined by the awful play of quarterback Mitch Trubisky. Detroit faded after a strong start. Once again, Matt Stafford piled up yardage without translating those numbers to wins, and now that he’s been sidelined by a back injury, what little hope the Lions had is dashed.

The Bears feel like they are just a QB away from being competitive whereas Lions coach Matt Patricia is going to have to think about a major overhaul if hopes to keep his job.

For those hearty souls who decide they actually want to subject themselves to this game, here’s everything you need to know to live stream Bears vs. Lions, including what to watch for on the field.

There are a number of options for watching Bears vs. Lions on streaming platforms that carry FOX. However, consult a coverage map to see what game your regional channel will be playing.

Bears vs. Lions live stream: How to watch NFL online

Chicago Bears vs. Detroit Lions: What to watch for

Fans of both of these teams have reached that point in the season where there’s nothing left to do but think about the future.

In Chicago, it is time for a new QB. Neither Trubiksy nor Chase Daniel give this team a good chance to win games. Last week, the Bears squeaked out a win against the Giants the only way they can as currently constructed. They held a flawed QB to 150 yards, allowing the offense to pull off a win with a measly 19 points.

That isn’t going to be good enough in most games, and even in a rather good game for Trubisky where he threw for almost 300 yards, he still threw two interceptions. More troubling, the running game that seemed to be emerging a few weeks ago with David Montgomery and Tarik Cohen has fallen back down to Earth. The tandem combined for a mere 47 yards on the ground.

Chicago’s fourth-ranked defense saved the day again, as it has in the Bears’ other four wins this season.

Diagnosing the problem in Detroit isn’t so easy. Or rather, the problem is the whole team. The Lions dropped a game to the woeful Redskins last week. Part of the problem has been Stafford’s injury. Jeff Driskel threw for 207 yards and tossed three picks in the game; Stafford’s worst week wouldn’t look that bad. But, you can’t really point to a strength on this Lions squad.  Thanks to injuries and a so-so roster, Driskel lacks offensive weapons outside of receiver Kenny Golladay. The defense is ranked 26th in Defensive DVOA.

And that’s not all. The offensive line has been awful in pass protection. The secondary has played very poorly, and only looked OK last week because of Dwayne Haskins’ inexperience. On special teams last week, the Lions missed a field goal, allowed a punt return touchdown, and racked up inexcusable penalties.

It’s hard to find a team playing worse than the Lions right now, but it is hard to find a QB more capable of losing a game single-handedly than Mitch Trubisky. And so, it is hard to call a winner of this game, other than your mother who will appreciate the help in the kitchen after you get so bored you start peeling potatoes to numb the pain.