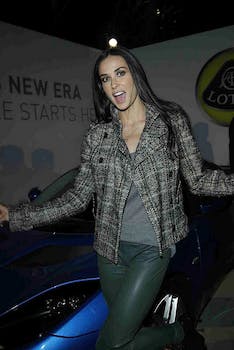 What would Miss Manners say about @mrskutcher?

When Demi Moore directly addressed her Twitter handle, her fans and followers responded in kind.

Judith Martin, better known as the etiquette maven Miss Manners, has stated that a divorcee is not obligated to give up her ex-husband’s name, especially not “a divorcee who took the public position that she had been wronged and the divorce was none of her doing.”

Demi Moore’s Twitter followers apparently disagree. Moore, who tweets to her nearly 4.3 million followers under the moniker “@MrsKutcher,” will soon divorce the man who gave her that name but as yet shows no inclination toward changing her Twitter handle.

Since returning to the microblogging site on Thanksgiving, fans, followers, and critics have openly debated the Moore’s Twitter surname.

Am I the only person who finds it awkward that Demi Moore’s twitter name is still @mrskutcher? asked one.

“changing my twitter name isn’t a top priority right now. sorry it bothers so many of u. should I not tweet until I do?does it really matter?” the actress tweeted.

The message clearly reveberated with her audience. It was retweeted 1,351 times, according to Topsy, a social media search engine.

Perhaps Martin nailed back in 1987, when the Internet was still future technology and twittering literally for the birds.  With some foresight, she discussed “the greatest etiquette error of all in regard to names:

“It is overwhelmingly rude to interfere with other people.”