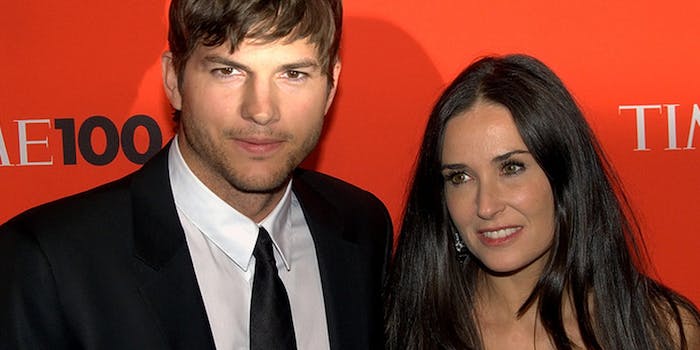 Say it ain’t so—Demi and Ashton are splitsville

What more can be said? Demi Moore will be @mrskutcher no longer.

Let’s all take a moment to mourn the divorce of Ashton Kutcher and Demi Moore, which they announced earlier today via their favorite medium: Twitter.

The pair announced they were divorcing after being married more than six years, or about 31 times longer than Kim Kardashian’s marriage.

“I will forever cherish the time I spent with Demi. Marriage is…” tweeted Kutcher before giving his chime.in account a publicity boost with the rest of the message that ended in “Love and Light, AK.”

Whatever, bro, you’re the one who allegedly cheated.

On Twitter, “Demi and Ashton” is trending. Many followers noticed they have unfollowed each other. Topsy, a social monitor service, recorded more than 12,000 distraught tweets the past hour.

Tweeters are “forever sad” and are ready to put the moves on Kutcher. “Ready for Demi Moore to change her twitter name so I can change mine to @MrsKutcher and have Ashton tweet at me, ”tweeted the clever Susie Tucker.

Don’t you have homework to do, Susie?

Perhaps @SoVeryAwkward put it best, “That awkward moment when the only thing surprising about Demi and Ashton splitting is that it took this long.”