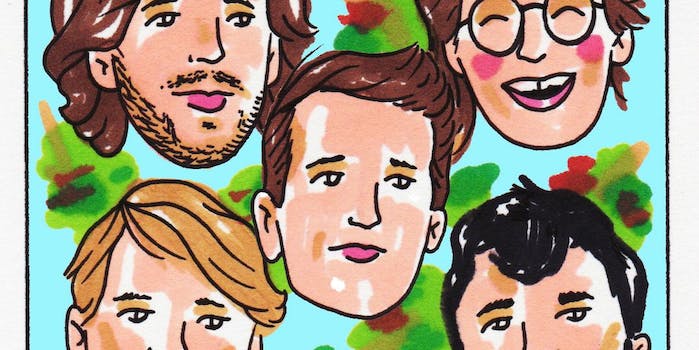 Forgo soul-sucking stages at nowhere bars, and take your vessel straight to the sea to check whether it floats.

Rolling Stone is quick to point out that Spirit Family Reunion found a voice by performing its saloon folk as hearty buskers—on street corners, subway platforms, and at farmers’ markets. That’s certainly one way to build a more authentic experience: Forgo soul-sucking stages at nowhere bars, and take your vessel straight to the sea to check whether it floats.

Don’t snicker: The band is committed to creating functional commerce out of their boho appetite for more authentic, outdoor recreation. The Newport Folk Festival vets recorded April’s 12-song-strong Hands Together with Coney Island as a backdrop, for example. It’s music for church basements, an open-door-policy sort of learned, secular-but-God-fearing revivalism.

And relax: These Brooklyn rovers are not full of shit. Though sure, the ceiling on this is that Spirit Family Reunion wins a Grammy, steals a stage, and tours with those Mumford monsters. (They’ve already hit the road with the Starbucks-popular but terrific and true Alabama Shakes.)

For now the only thing that matters is that despite the commitment to an aesthetic—a dangerous proposition for any new band—salvation comes from the resonant, lyrical songwriting. “You’re passed out drunk on your lover’s lawn—you make the best of the situation,” goes the sin-fueled “Hello Houston.” You almost believe that singer Nick Panken was over-served at a rodeo and went for a swim in the river.

The Daily Dot has partnered with Daytrotter to highlight one session a week, which will be available to stream here exclusively in its entirety. In this installment, sweaty plucking for the waterin’ hole—or at least the drive to Sonic for a slushie.