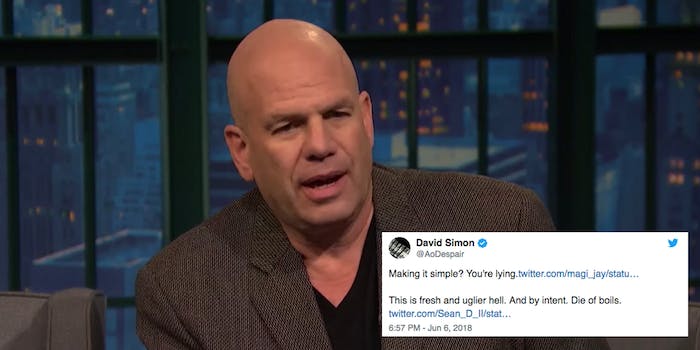 David Simon, creator of The Wire and former journalist, said he’s been banned from Twitter over pro-immigration tweets—and he’s not sure if he’s willing to take the steps necessary to come back.

In a blog post Friday, Simon wrote a short tribute to his late colleague Anthony Bourdain. Simon then explained that he’s now unable to access his Twitter account, which as of the time of writing is still public.

“Also, I have been banned from Twitter, and as I am at this moment indifferent to removing the tweets they insist are violative of their rules, it is unclear when I will return to that framework,” Simon wrote.

His tweets, more often than not political, tend to take on as blunt and biting of tones as any of his characters. In the past few days, he was particularly focused on federal policies separating immigrant families.

I would agree with you, but then we'd both be racist, xenophobic fuckstubs with no actual understanding of the adjudication process by which asylum is legally determined. Blocked. https://t.co/2S2E8i1y0l

But do not drag one one Tronc executive off the corporate plane or touch their year-end bonuses. What Wall Street and chain ownership did to American newspapering should be answered with piss-filled balloons dropped from a great height. https://t.co/RFWf4YZhwN

But as Simon argues, he’s usually fighting back against people whose ideologies supersede the nastiness his words may portend. He offered a scathing critique of Twitter’s current algorithm and methods of moderating tone or hate speech.

Suffice to say that while you can arrive on Twitter and disseminate the untethered and anti-human opinion that mothers who have their children kidnapped and held incommunicado from them at the American border are criminals—and both mother and child deserve that fate—or that 14-year-old boys who survive the Holocaust are guilty of betraying fellow Jews when there is no evidence of such, you CANNOT wish that the people who traffic in such vile shit should crawl off and die of a fulminant venereal rash.

He’s hardly the first person to be banned from the social platform under similar circumstances, if one of the few who’s able to get his opinions out by other means. But for Simon, returning may mean sacrificing more than just a few tweets.

“As far as I’m concerned,” he wrote, addressing Twitter CEO Jack Dorsey, “your standards in this instance are exactly indicative of why social media—and Twitter specifically—is complicit in transforming our national agora into a haven for lies, disinformation and the politics of totalitarian extremity.”