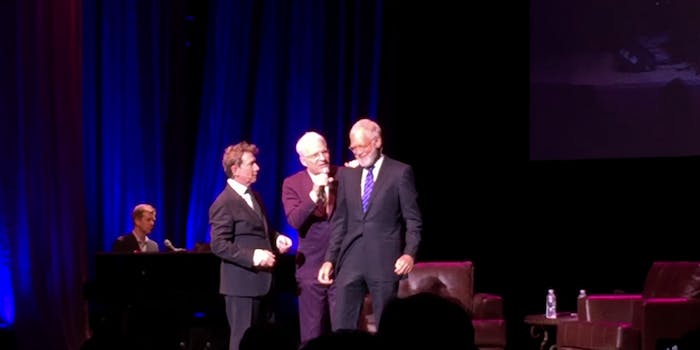 'That's not a hairdo; it's a wind advisory.'

David Letterman, who’s been lying pretty low since leaving The Late Show, returned to the stage to make fun of Donald Trump in spectacular fashion.

The former late-night host surprised the audience attending A Very Stupid Conversation with Steve Martin and Martin Short in San Antonio Friday night. In addition to sharing stories, Letterman told the crowd that he had absolutely no regrets about retiring—until Trump announced his candidacy for president. Letterman was prepared for the occasion, though, and he pulled out one of his famous Top Ten lists to read.

Comedians have been waiting for the Trump trainwreck for years, and Letterman wasn’t about to miss out on the fun.

Even if the jokes are mostly about his hair, we’ve realized one thing: we’ve sure missed Letterman.