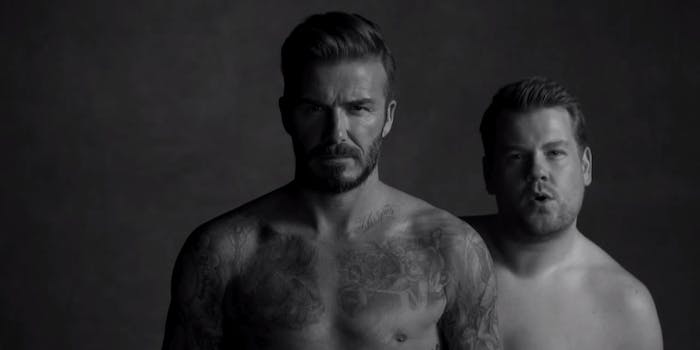 ‘D&J Briefs: fun to wear for a man with a great body—and David Beckham.’

James Corden is trying his hand at underwear modeling with some help from a man who’s had plenty of experience with it.

We’re not exactly sure what prompted Corden and David Beckham to launch their own fictional underwear line on The Late Late Show. But if it means getting to see Beckham acting like a serious model while Corden basically does what any of us would do while modeling with him, we’re certainly not complaining.

Both men put everything out there—and they’re rewarded for it.

While this might seem like a bit that came out of nowhere, Beckham and Corden have actually been bonding and cuddling in an adorable and mysterious friendship for years now.

Screengrab via The Late Late Show With James Corden/YouTube