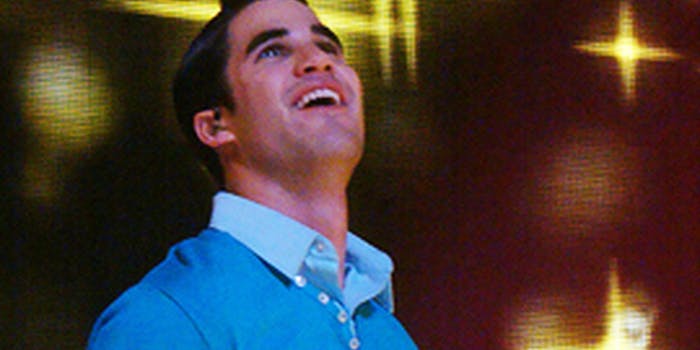 The actor reached out to Glee fans before Thursday night's big breakup. His emotional Facebook note already has over 40,000 likes.

Actor Darren Criss took to Facebook Thursday night to personally commiserate with fans over the latest plot twist for his character in Glee.

Fans had been long preparing for last night’s heart-wrenching, relationship-destroying episode of Glee, “The Breakup.” Criss plays Blaine Anderson, one half of the show’s beloved queer romance, “Klaine,” with Kurt Hummel. Many fans were predicting—correctly—that a rocky road was approaching for what had thus far been a mostly storybook romance.

As fans tweeted #courage to each other, Criss posted to Facebook an hour before the show aired, to help soften the blow, and to let them know that all was not lost.

Criss left fans a literal love letter, a long, moving missive thanking them for the way they had supported him since his days starring in A Very Potter Musical through the last two years of his run on Glee as Kurt’s heartthrobby love interest:

Tonight is the premiere of the dreaded break-up episode. For many Glee fans, I imagine there will more than [one] reason to be sad. But cheer up, think of it this way: much of your support has allowed me to be on this show long enough to reach a breakup in the first place; it has created a relationship that people cared enough about whereby it was even worth writing an episode about its potential end.

Criss garnered mass acclaim as a performer when his University of Michigan drama troupe, Starkid, became a viral YouTube sensation for the first of their musicalizations of Harry Potter. Fans were overjoyed when he was cast on Glee, in no little part because, as he reminded them last night, he is a fan himself.

Criss’s career is a vivid illustration of the constantly shifting overlap of roles in the age of new media and the obliteration of the so-called “fourth wall” between fans and creators. Criss seems more aware of this than anyone, going straight to the heart of the Klaine fandom in describing how much the show’s fan support meant to him. “You, the fans, have been a huge part of the reason why I’ve been able to do half the things I’ve been able to do,” he wrote:

Not only am I [a] fan myself, but I do have an internet connection. I see the gifs, I see the fanfics, I see the memes, and it’s all amazing stuff. …[Y]ou, as a group, have all accomplished some pretty amazing things yourselves. You [have] done everything from raising money for great causes to organizing awesome flash mobs….You have come together to create something far greater than any of us: a real sense of community and a genuine place of support- not just for me but for each other. And I can safely say that I wouldn’t be where I am now if it weren’t for that.

Already nearly 40,000 fans have liked Criss’s Facebook post and left almost 5,000 comments. Many fans commented and tweeted that he left them in tears.

“I cried when i read this last night,” commented a fan named Lauren Schultz. “The mix between Klaine splitting up and the sincerity of this note, the emotions were just too much to handle. Thank you SOO much for, not only your appreciation of your fans, but also your wonderfull [sic] acting on a show containing a relationship that captured my heart to the extent that i would cry when it ended.”

“Glee is about opening yourself up to ENDLESS PAIN,” a fan named meadhbhy wrote on Tumblr.

But most comments about the episode itself, and Criss’s performance alongside Chris Colfer, who plays his now ex-boyfriend Kurt Hummel, were extremely positive. It helps that many fans believe “Klaine is forever”—that the breakup is just a bump in the road to eventual happiness for one of mainstream television’s first major queer relationships.

And Criss himself refused to confirm whether it’s the literal end for the couple, saying only, “I hope that this is just the beginning, and that I get to thank you many more times for many more adventures as the years roll by.”