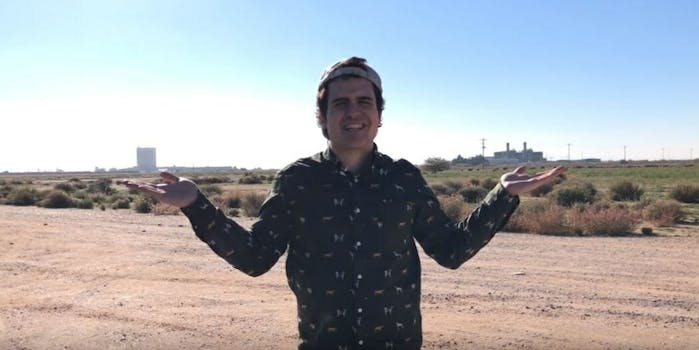 YouTube comedian goes viral for showcasing the hellscape of his hometown

He's caused a ‘legitimate rift in the community.’

Danny Vega doesn’t mince words when he talks about his hometown of Casa Grande, Arizona. He talks about the housing crisis, the mass exodus of big-box stores, and an apparently high teenage pregnancy rate. And in a YouTube video that’s gone viral, Vega does an effective job of showing the town as an absolute hellscape.

Whether Casa Grande is really the disaster Vega is portraying it to be probably depends on your perspective and whether you’ve ever spent time there. But Vega’s video is funny either way. Unless you happen to enjoy living in Casa Grande.

As of this writing, the video has more than 550,000 page views—considering Vega had about 150 subscribers before he uploaded the video, that’s awfully impressive. It’s gone viral on Reddit, where somebody claiming to be Vega’s brother wrote that the video is  “causing a legitimate rift in the community.”

It’s easy to see why. In the video, Vega—whose subscriber base has since grown to about 4,300 as of this writing—utters lines like, “They say there’s nothing to do in CG, but there’s an old water slide where you can slide down … and die” and “CG has some special opportunities, like if you ever wanted to go to college right next to a dead mall … you can do that.”

He also pretends to pull up to the drive-thru of an abandoned Wendy’s and orders the “overwhelming sense of failure.”

Unsurprisingly, Vega’s content didn’t thrill some of the residents in Casa Grande, which is located about 50 miles southeast of Phoenix.

The local paper, the Casa Grande Dispatch, referred to Vega as a “New York comedian,” and Vega said even his mother protested the video’s message. Wrote the paper:

Vega posted on social media that his mother worried locals would think poorly of her because of the video. It’s a joke, Vega reminded her.

“We have a Dillard’s,” Vega claims his mother said in response.

Here’s a twist, though. In doing an interview with the Dispatch, Vega told the newspaper that he “actually really like[s]” Casa Grande. After all, when you’re from a town where everything seems abandoned, it’s apparently hard not to fall in love with your surroundings.